The series of 40th anniversary releases of Rush’s studio albums finally reaches what is probably the band’s finest hour, the mighty Moving Pictures. Although many will argue strongly in favour of 2112 or A Farewell to Kings, and there are even those who will put the case for Signals or Fly by Night, but in terms of an overall album, when all the band’s song writing, playing, the production, even the artwork, are at something close to their peak, this genuinely feels like one of the highest, if not the highest, achievements of the band’s illustrious career.

The album is the logical progression of the almost equally brilliant Permanent Waves, where the band concentrated on writing shorter, more concise songs, even if they let the reins slip a little on side 2, although never losing their vision, complexity and above all, their ambition, and raising the song writing to an even higher level. The band had planned to take a break after the lengthy Permanent Waves tour, but when they met up prior to a shorter American tour in late summer 1980, the writing for the next album had already begun, and the band included early versions of ‘Tom Sawyer’ and ‘Limelight’ in the set for these dates, with the sessions proper taking place over the October and November of that year.

Like Permanent Waves, the new album begins with a genuine rock classic, one of the staples of rock radio ever since, ‘Tom Sawyer’. From Geddy Lee’s opening synth drone, to Alex Lifeson’s rock hard riffs, via Neil Peart’s thoughtful yet challenging lyrics, everything is just absolutely right, and for any Rush fan, the Professor’s drum fills at around 2.32, mimed in thousands of arena seats and rock discos ever since, will never fail to raise the hairs on the back off the neck. In fact, the first four songs, which comprise the first side of vinyl, are well nigh perfect. ‘Red Barchetta’ is a reprise of Peart’s sci fi storytelling, telling a tale of an illegal car ride in days when cars have been outlawed. The music matches the lyrics perfectly and the song just surges along. ‘YYZ’ is one of the band’s regular forays into instrumentals, here there’s so much going on, including Alex’s string bending solo, Geddy’s bass trying to outdo the guitar, the brief middle passage where Geddy’s synth atmospherics are almost worthy of Genesis at their peak, it’s still awe inspiring that they were able to play this live. The final track on the first side of vinyl is ‘Limelight’ which Rush fans are quite prepared to argue is the best song about fame and fortune ever written. Neil’s lyrics are as ever to the point, treating the holy grail of stardom with respectful suspicion, including the infamous observation ‘I can’t pretend a stranger is a long-awaited friend’. Alex Lifeson, by the way, regularly claimed that his solo in ‘Limelight’ was his favourite of all his solos. Suffice to say, that all four of these tracks became all but fixtures in the band’s sets for the rest of their career.

The flawless majesty of the first side often overshadows the three tracks on the second side of the vinyl may not be quite as accessible, but these are just as impressive in their own way. ‘The Camera Eye’, at not quite 11 minutes long, harks back to the days of ‘Xanadu’, but the lyrics, a Peart travelogue, are reflective and yet celebratory, and some of his best work. The instrumental passages also show the band on their very best form. ‘Witch Hunt’, subtitled ‘Part III of “Fear”, tying it in with ‘The Weapon’ (Part II) on Signals, and ‘The Enemy Within’ (Part I) on Grace Under Pressure, is much darker both musically and lyrically, a tale of vigilantes and lynch mobs. The album closes with ‘Vital Signs’, a track, with its bubbling, quasi-reggae backing, showing the band were not entirely averse to reflecting what was going on the wider music scene, in this case a doff of the cap to the Police, who had really impressed all of the band at this point in their career. It’s also significant for Rush historians in that it clearly shows the progression towards the next studio album, Signals.

Rush have always claimed that they went into the studios with only as much material as they needed, so there are no unused or unreleased songs in the archives, and they’re also very unwilling to allow the release of demos or different versions of album tracks. For the hardcore fans this is a pity, ‘YYZ’, for example, grew out of a jam between Geddy and Neil, and snippets like this would be endlessly fascinating in hearing how the finished versions came into life. But we do have something just as valuable, a complete unreleased show from the ‘Moving Pictures’ tour, recorded on the first of a three-night stint at the Maple Leaf Gardens in the band’s home of Toronto, whereas the show in Montreal four nights later was recorded and filmed, some of which was released as part of the Exit…Stage Left live album, along with stuff recorded in Glasgow. The fact that this is a full show, with the full set list in its original order rather than a compilation of songs from different shows, not to mention including Geddy’s between song intros etc, gives it far more immediacy and continuity, and whatever remastering or remixing techniques were used, this sounds far better, a perfect record of the band in top form. More of this sort of thing, please.

With this being an anniversary edition, there are several different versions of the album available, depending on your preferences or budget. I suspect most will be content with the 3CD or 5LP ‘Deluxe Edition’, with the remastered original album, plus the live set. There are digital versions, including a Dolby Atmos mix, but also the Super Deluxe edition for the hardcore, with a book, both the CD and LP versions, drumsticks and picks (endorsed items only, not originals, obviously), replica tickets and posters and even a model red Barchetta, but even if you already own one of the several previous versions of this album, the inclusion of the live tracks makes it a valid release.

Moving Pictures is not just a significant album for Rush, and an important album in the history of progressive rock and metal, it’s just a brilliant record its own right, a stellar band coming into their own. This is as good a version of any to add to your collection. 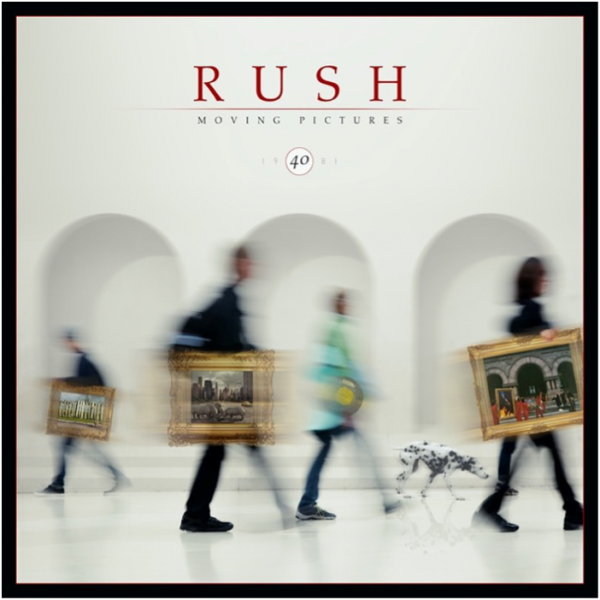