“When they turn the pages of history, when these days have passed long ago”

It seems appropriate that these are the opening lines on an album that’s celebrating its 40th anniversary, which is being marked with lavish new expanded editions that include a remaster of the original album, a complete show from their 1978 British tour, and cover versions of some of the album tracks, in a similar format to last year’s 40th Anniversary edition of 2112. This release is available in four versions, A Super Deluxe Edition that includes 3 CDs, a Blu-Ray audio disc and 4 vinyl albums, plus assorted bits of memorabilia, plus a 3 CD Deluxe edition, a 4 LP Deluxe Edition and a Deluxe Digital edition. With the exception of the Blu Ray, all the musical content of the various configurations is the same.

As far as the album itself goes, it came at yet another pivotal point in the band’s history. The previous studio album, against the odds, had saved the career of the power trio from Toronto, the 20-minute title track captured the imagination of thousands of new fans, and the album was a commercial and critical breakthrough. The double live All The World’s A Stage allowed them some time to ponder how to capitalise on their new success, and they decamped to Rockfield Studios in South Wales to record. Suffice to say that the subsequent album more than consolidated the band’s success, and ultimately became one the defining albums of their whole career.

Only a download was available for review, so it isn’t possible to pass judgement on the remastering, but musically, it’s easy to discern the band’s vision for the album, not only to build on the success of 2112, but also to avoid falling into the trap of recording something along the lines of 2112 Part Two. I think it’s fair to say that they did a good job, after all, two of the album’s six tracks would become fixtures on any Rush Best Of… until the end of their career. The opening, title track sets the scene, including an opening sequence recorded in the open air at Rockfield, before the stately main riff and one of Neil Peart’s typical ‘call to arms’ lyrics. This in turn gives way to one of the band’s greatest and most popular pieces, the mighty, eleven minute ‘Xanadu’. Influenced by Coleridge’s poem ‘Kubla Khan’ and the classic film ‘Citizen Kane’, even now, so many years after first hearing it, it’s still an arresting piece of music, from the slowly building power of the opening sequence, all the way through to Alex Lifeson’s climactic guitar solo. I even love Geddy’s highly individual pronunciation of the word ‘by’. It’s a magnificent piece of work, but perhaps the most awe inspiring thing about it is the fact that it was recorded in one take. An incomplete test run to get the levels right and then a complete run through that ended up as the final version. I suspect there may have been one or two keyboard overdubs, but even so it’s a monumental achievement.

The second side doesn’t quite match the first, although it contains another song that became a signature song for the band, ‘Closer to the Heart’, which became their first hit single. ’Cinderella Man’, a much underrated song, was another influenced by Geddy’s love of classic cinema, in this case ‘Mr Deeds Goes To Town’. ‘Madrigal’ is a comparatively simple, semi acoustic song, before the album ends with the complex sci-fi epic that is ‘Cygnus X-1’, which ultimately served as the prequel to the band’s next studio album, ‘Hemispheres’. It’s not quite as focussed a piece as ‘Xanadu’ and therefore doesn’t have quite the same impact, but you have to admire the vision and ambition of the band in putting it together.

The centrepiece of the bonus material for this Anniversary release is the complete show from Hammersmith Odeon in February 1978, part of the band’s second tour of the UK. At this point in the band’s career, it’s a dream of a set list, and shows exactly why the band had such an electrifying effect on so many rock fans in the UK, but it should be pointed out that it’s not all previously unreleased. About two thirds of it was released as part of the Different Stages Live album in 1998, but having a new live version of 2112, as well as what is arguably the definitive live version of ‘Xanadu’, makes it worth having.

As with the 2112 Anniversary release, we also have some cover versions of some of the songs, and I don’t think there’s much doubt that the most interest will be in Dream Theater’s take on ‘Xanadu’. The band play it fairly straight, although adding some of their own touches, and while John Petrucci’s guitar solo is tremendous, I don’t think it’s one of James Labrie’s best performances. He seems to be straining at some of the higher vocal parts, and some of his phrasing also seems a little awkward. Canadian band Big Wreck cover ‘Closer To The Heart’, and again don’t mess too much with the original, although they do play it a little heavier and embellish the guitar solo. It does seem odd not to hear Geddy doing the vocals, though.

The Trews take care of ‘Cinderella Man’, and apart from the band putting their own stamp on the midsection and solos, again it’s a straightforward cover, but the band do make a good job of it. The last cover is by American-Chilean multi-instrumentalist Alain Johannes, who plays ‘Madrigal’ and he puts by far the most individual spin on the original track. It’s more of a modern rock take on what was originally an acoustic and very reflective song, and I don’t think the update works on a song with such a thoughtful, melancholy feel.

If a serious Rush fan wants to spring for the Super Deluxe Edition, there’s also a Blu Ray which includes a 5.1 Surround sound mix of the original album by Steven Wilson (who else?), as well as three 1977 promo films, for ‘Farewell To Kings’, ‘Xanadu’ and ‘Closer To the Heart’

Overall, this is a good package to commemorate a fine, fine record, but like the 2112 edition, there’s still a nagging feeling that it could have been so much more, maybe by including a completely unreleased concert recording, maybe by adding some interviews. whether modern day reminiscing or even from back in the day. The original album is brilliant, the live recording is a joy, and the covers are interesting, but if these anniversary editions are to continue, I think a little more needs to be put into the mix. 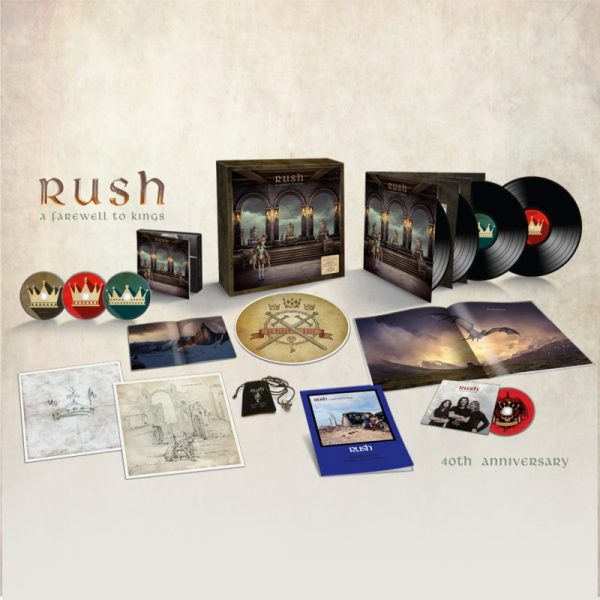