Re-released through Universal on December 16, 2016 and continued to be heard with awe by Paul Quinton

It seems barely believable that it’s now over 40 years since Rush’s breakthrough album was released, considering how influential and respected, even revered, the band are now, that it was a make or break record for them, with their previous set ‘Caress of Steel’ having been a commercial disappointment, and the band’s very future at risk. So with their record deal in the balance, that they wrote and recorded an album with a 20 minute concept piece, based on a novella by Ayn Rand, a controversial Russian author, seems almost as unbelievable as the fact that it became such an important and influential album.

Although the band have made a lot of their 40th Anniversary, including the R40 farewell tour of North America, this release has come as a bit of a surprise. After all, it’s not as if 2112 has been neglected in the last few years. It was remastered for the second time in 2011 for the ‘Sectors’ box set, followed by a deluxe edition in 2012, including a sumptuous 5.1 surround mix, which begged the question of what a new edition might have to offer. But firstly, it has to be said that the packaging is superb. The cover has been redone so that the ‘Starman’ now resembles a Banksy piece stencilled onto a ship’s hull, and the booklet in the 3 disc version is tremendous, full of new details and quotes in a fine essay by Rob Bowman. The second disc has unreleased live material, as well as cover versions by some top line acts, while the DVD adds to the unreleased live material, videos and documentaries for some of the cover versions and an excellent  Q&A with Alex Lifeson and co-producer Terry Brown. So far, so good.

Musically, no matter how many re-releases, remixes and remasters there are, nothing can diminish the ambition, the vision, the musical brilliance and the sheer impact of the first side of 2112. As progressive rock epics go, I have this right at the very top of the tree, alongside ‘Supper’s Ready’ and ‘Close To The Edge’, and as far as lyrics and storytelling go, it surpasses both of those, as from the eerie sound effects of the intro, through the exuberance of ‘Overture’, all the way through to Neil Peart’s chilling voiceover at the end, the music and the story flow seamlessly, although each segment can hold its own as a separate piece. And, strewth, does it rock. The band have played at least a part of 2112 on every tour since it was first released, and it never fails to raise the roof. It’s a wonderful achievement, and could be seriously argued as the moment that progressive metal began.

It’s probably understandable that most of the second side of the album can’t match the heights of the first, although it does have its moments. ‘A Passage to Bangkok’ has always been a favourite, and ‘Something For Nothing’ was another live staple for several years, continuing the theme of freedom and integrity that ‘2112’ itself puts forward. ‘Twilight Zone’ is a bit of a hidden gem, slower and more atmospheric than a lot of Rush’s work at this time, but ‘Lessons’ and ‘Tears’ are almost unique Rush tracks in that they are solo compositions, by Alex Lifeson and Geddy Lee respectively and it’s well worth spending time with these much underrated tracks. Overall, 2112 remains a tremendous album.

Moving onto the second disc, I have to say that the bonus tracks are a definite mixed bag. Rush rarely went into the studio with surplus material, and their recording method meant there are few if any existing outtakes. ‘Solar Federation’ is merely an 18 second clip of Neil Peart’s ‘Attention’ voiceover as an intro leading to the cover versions, whereas for Rush’s Hall Of Fame induction, Dave Grohl, Taylor Hawkins and latter day Rush producer Nick Raskulinesz donned wigs and kimonos to rip through ‘Overture’ before being replaced by the real band. It was brilliant, but this is a studio version, played fairly straight. Listenable, but adding little to the original. Billy Talent takes care of ‘Bangkok’ and again it’s little more than a heavier cover version. Steven Wilson, on the other hand, in his version of ‘Twilight Zone’, does create something different, adding his characteristic melancholy, not to mention a cracking guitar solo. Similarly Alice In Chains put their own stamp by adding orchestration and joint vocals by Jerry Cantrell and William Marshall, giving the song a new aspect that really works, while Canadian singer Jacob Moon also tries to do something a little different with ‘Tears’, but doesn’t quite pull it off, although it’s an interesting listen.

As well as the cover versions, there’s a live version of ‘2112′ itself from Toronto in 1976, the same series of shows from which the All The World’s A Stage live album were compiled. This performance is not that different from the live album version, and is just as good, making you wonder why the band chose one version instead of the other. Similarly with ‘Something For Nothing’, taken from the same series of shows. However, ‘Twilight Zone’ is taken from a 1977 performance, and to be honest the sound quality is worse than most bootlegs, with the band describing it as ‘contraband’. A curio, nothing more.

The DVD follows the same lines as the bonus disc, with an extract from a show at the Capitol Theatre, Passiac New Jersey, at the end of 1976. Its black and white footage, digitally restored, and exactly the kind of bonus feature Rush collectors dream about. I was hoping for the Hall Fame performance, but for some reason Nick Raskulinesz was opposed to that and so we have straightforward studio footage of Grohl, Hawkins and Raskulinesz, again adding little to the audio version. As someone who likes seeing the nuts and bolts of how music is made, I enjoyed the feature on Billy Talent recording ‘Bangkok’, but why them and not Wilson or Alice In Chains? Not instead of, but as well as? Best of all is the Q&A with Lifeson and Terry Brown, providing answers to questions we’ve waited 40 years to ask, like how did they record the waterfall part on ‘Discovery’? Seriously, it’s informative, enlightening, often very funny, and really takes you into the album. My favourite piece of bonus on the entire release.

With so many versions of 2112 around, a release like this stands on the quality of its bonus material, no matter how great an album the original is. The remastering of the original album is first class, crystal clear and even after all this time, highlighting and bringing forward new dimensions to the music. If the bonus track covers are a mixed bag, they’re still listenable, and the archive live material is priceless for fans. This record has regularly featured in lists of the Greatest Prog Albums of all time, and, along with the equally mighty Moving Pictures, is a defining album for the band. If you don’t own it already, this is the version to get, and if you do, get it again for the vintage live tracks and Alex Lifeson talking about waterfalls. 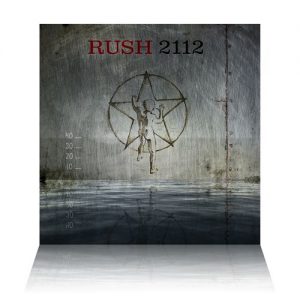