After 45 years and 14 albums, this gig – ending their “Final Mile” tour at Stirling Castle last year – was Runrig‘s Last Dance. 52,000 fans came from near and far. Airlines put on extra flights from the Western isles, the birthplace of the band. Fans flew in from all over Europe. Together, a truly international crowd assembled on the field in front of Stirling castle, itself a famous landmark in the history of Scotland. The band begun by two Beatles’ fans, Rory and Calum McDonald, was taking its last bow.

Runrig’s history is well documented, but for a brief bit of background we’ll go back for a moment to 1973. Initially, they had cornered the Gaelic Folk market, but struggled to break out. Most point to Heartland (1985), their 4th album, as the one that led their exploration of Celtic culture into the anthemic rock arena, and wider recognition. The follow up, The Cutter And The Clan (1987) built on this, broadening their fanbase further, going beyond Scottish and indeed beyond UK borders into mainland Europe.

Tonight’s historical, 3 hour gig treats us to the Runrig story, and translates now into a 3 CD, 31 track boxset, or 2CD/2DVD and other increasingly grand combinations. The concert is beautifully recorded and beautifully shot by multiple cameras and mikes. Runrig are not a theatrical band… the music is all the theatre they need… they dramatise events in a way that makes them sound visceral and urgent, from key songs ‘Cnoc Na Feille’s and ‘Skye’s skirly folk roots to ‘Protect And Survive’s and ‘The Stamping Ground’s relentless anthemic rhythms.

For 180 minutes the sky is filled with swirling keyboard swathes, clanging guitars and epic aspirational stories set against Alba’s bloody past and iconic landscape. The fans are already bought in of course, they respond loudly and it’s like they know every word of every song. And they probably do.

Arguably the the first of the evening’s high points is the appearance of original vocalist Donnie Munro (replaced by Canadian Bruce Guthro, 1999). He’s joined by the Glasgow/Islay Choir for ‘Cearcal A’Chuain’ (the Ocean’s Circle), and the last is the heartwarming version of ‘Loch Lomond’, (what else…their breakout song) and an acapella ‘Hearts Of Olden Glory’ to close the evening.

A Hebridean hotel owner and Runrig fan had left this note behind on Skye: “The peat’s in, the fishing’s done, there’s whisky behind the bar. You’ll need to help yourself, we’re away to see Runrig”. There’s a man with the right priorites. 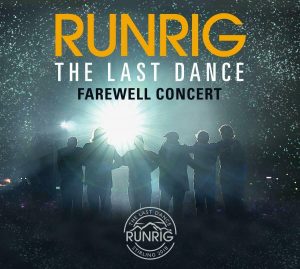