So, Finnish stoner power trio Ruckwater drop ‘Bonehead’ – their third EP since their inception in 2011 – upon us. It’s an interesting proposition, building upon their previous EP’s and showing a leap in maturity and style, with a definite mix of genres thrown into the (somewhat loud) blender.

The skewed blues intro to opening track ‘Once More With Feeling’ leads into a nice, relentlessly muscular groove. The bluesy undercurrent continues with greasy biker rock vocals growling over the top, all wrapped up in a bruising bundle vaguely reminiscent of Troubles’ classic ‘Manic Frustration’.

And then it’s heads down for a batch of no-nonsense belters. ‘No Gain’ thunders past with Lemmy raising a glass of JD to it. There’s a touch of punk to the bludgeon and even a brief downtuned sludge riff in there too! The scorching bushfire guitars of the one minute ‘Super Frustration’ continue the headlong gonzo/Motorhead/thrash/punk ‘o rama blitzkrieg while the breakneck assault of the title track adds a soupcon of ‘In Utero’ era Nirvana grunge stylings.

Things are shaken up slightly for ‘Labyrinth’. The stop/start scuzz blues vibe is slower, trippier. There are interesting guitar flourishes that prick up your ears but don’t detract from the caveman chug. The pace shifts temporarily into a livelier Doom groove and then the instruments fade out while the band chant off into the ether. Interesting.

But it’s the ten plus minutes of closer ‘Flame Doesn’t Cast A Shadow’ that shifts you on your axis. It’s more relaxed without losing any of that intensity, the bass heavy intro builds slowly and threateningly. There are almost U2’y guitar touches (but don’t let that put you off). It drifts and fades out completely into a wall of feedback and amp abuse…until a gently strummed guitar reappears from the primordial mist. Hats off to guitarist Make Makkonen because the ensuing instrumental break is outstanding. The powerful, almost post rock dynamics are flawless – building in force and working up a fierce head of steam…until the storm again passes, overdriven amps beg for mercy while instruments are left to feed back. It’s an epic finale and a mouthwatering taste of what Ruckwater are capable of. Surely a full length album has to be next? We can but hope. 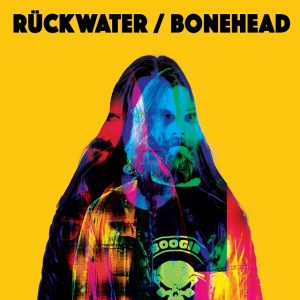