1984, and the pursuit of the rock’n’roll dream was never more potent than on the US Westcoast, particulary LA’s Sunset Strip. Losing guitarman Jake E. Lee to Ozzy Osbourne and keyboardman Claude Schnell to Ronnie Dio would have led to most bands realising that they weren’t seeing the big picture. But Bless ’em, Rough Cutt believed their time would come, and any band with Paul Shortino on vocals is bound to have a chance. A year later they signed to major label, Warner Bros.

The debut, produced by Tom (Judas Priest/ Krokus/ Y&T) Allom hedged its bets, throwing in a few covers as well as the self-penned stuff. Few bands could have made Erma Franklin’s ‘Piece Of My Heart’ sound like it was recorded by Brian Howe’s Bad Company, converting it from a pained, blues’ wail into a hard rock anthem, but Rough Cutt did. In its own way it was emblematic of an era, signalling a cultural shift away from sixties/seventies’ raw and uninhibited toward eighties’ arena rock readiness. The second cover, the Choirboys’ hit, ‘Never Gonna Die’ is takeaway melodic rock, easily digestible, with a questionable aftertaste. Both tracks suggest label “safety first” interference. It’s to Shortino’s credit that neither track has a sell-by date. His voice, a throaty, impeccably controlled roar, provides that miles-on-the-clock stamp of authenticity that few singers from the genre could aspire to.

Of the band’s own songwriting collaborations, there are a number of tightly structured rock songs with passion to burn. Opener, ‘Take Her’ is a melodic hard rock gem. A brilliantly baroque stomp, ignited by the sparks flying from Amir Derakh’s gargantuan, slow grinding, off kilter riff. Eventually and amusingly, it drops off into the Hall Of The Mountain King, and out again. Mrs Dio managed the band, and the theatrical pomp of ‘I’m Dreamin’s bridge and chorus bear the unmistakeable hallmarks of the family brand.

Shortino brings his formidable presence to bear on the rather pedestrian ‘Cutt Your Heart Out’ and ‘She’s Too Hot’, using his earthmoving vocals to carry these songs way beyond the limits of their stunted lyrics. But elsewhere, even Shortino’s and Derakh’s valiant efforts can’t mask the disposability of ‘Kids Will Rock’ and ‘Black Widow’, both lacking the cutting edge to connect and achieve any kind of emotional engagement.

The remastering is a double edged sword. Sonic separation wins but depth of field loses. No surprise really, it was recorded over 30 years ago. Not a perfect album then, but Amir Derakh’s skilled technique and Shortino’s compelling, charismatic vocals add a maturity to the music that most in Rough Cutt’s peer group lacked. Sadly, lowest common denominator party rock was de rigeur at the time and the album stiffed. 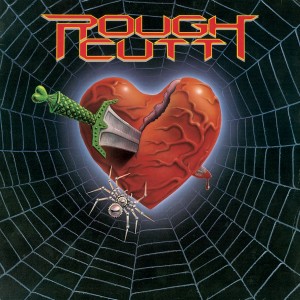