This gig was the final one of a UK stint that had also included the headliners filming a DVD at the Guildhall, in Derby, while the Midlands’ own Dante Fox, one of British melodic rock’s most underrated bands, gave us an opening set of 45 minutes of quality music. They have some great songs, and a regular schedule of gigs over the last year has clearly paid dividends. Despite a cold, Sue Willets sang as well as I’ve ever heard her live, and her performance, as well as the tightness of the band, made the title track of the ‘Lost Man’s Ground’ EP one of the highlight’s of the set. 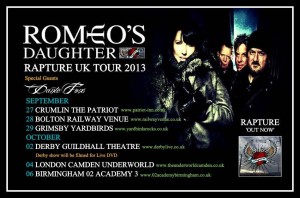 The set-list itself was drawn from both the band’s full-length albums plus a block of songs from the EP, which formed the centrepiece of the set, and almost matching the performance of the title track as a highlight, was ‘Who Stole The Innocence’, now apparently renamed ‘Who Stole The Innertube’ by Romeo’s daughter drummer Andy Welsford. At Firefest last year, the band seemed a little tentative, but each time I’ve seen them since, they’ve improved and are now a solid and entertaining live band. They’ve just been confirmed for HRH 2 in North Wales next March, and hopefully this will just be one in a series of gigs to help keep them in this run of good form.

It’s been eighteen months or so since Romeo’s Daughter released their fine comeback album ‘Rapture’ and they’ve gigged fairly regularly since. This was the last date on this particular series of shows, which included the filming of a live DVD in Derby a few days prior to this show, and intended to be the last before they concentrate on recording a new album. Nonetheless, there was absolutely no sign of any staleness or tiredness in the band. They seemed full of energy and enthusiasm, from the opening song, ‘Tripping Out’, to the last song of the encore. Singer Leigh Matty, in particular, was dancing and bouncing around the stage through the whole show, almost as if she was still trying to burn off the pent-up energy from the 15 years or so the band was inactive.

Something that no doubt helped to keep things fresh for the band was that they’d adjusted the set-list from the previous tour. The great bulk of the set (all but three of the eighteen titles played on the night) came from ‘Rapture’ and the band’s superb debut album, with the songs from each were almost played in blocks. The newer songs dominating the opening two-thirds of the set, and the favourites from the debut coming mostly in a rush at the end. Apart from the two songs from their excellent but underrated second album, ‘Delectable’, the real surprise in the set was the inclusion of a new song, ‘Perfect Plan’. Due for inclusion on the new album, it’s straight from the Romeo’s Daughter workshop for producing almost instantly memorable melodic rock songs, with a great chorus and some smart lyrics too.

As well as the new song, they also managed to produce some other surprises, including playing ‘Dancing Slow’, a song from ‘Delectable’ that had never been played live before this tour, and playing ‘Will Be’ with just Leigh Matty and acoustic accompaniment from Craig Joiner. Simple, but effective, as was the plan to use the great majority of the choices from the debut album to bring the show, both main set and encores, to a terrific conclusion, and if the volume was mysteriously turned up for the opening of ‘I Cry Myself to Sleep’, no one seemed to be complaining. There was another surprise from the encore, when the band began with ‘Hymn’, a rarely played song from the debut, before an absolutely terrific ‘Wild Child’ rounded off a fine gig. It’s almost a shame that the band will be off the road for a while when they’re in this form. While a new album is something to look forward to, hopefully it won’t be too long before we see the band back on the road again.