Another highly rated ‘Stones Gig, now available on CD for the first time…

Reviewed by Brian McGowan, released by Eagle Rock on 16 June 2017.

In the decade that fashion forgot, Punk and Disco hammered hard on the gates of rock’n’roll. Looking for a reliable defender of the faith, Rolling Stones’ fans tested out the band’s 3 mid seventies albums. What they wanted was a powerful distillation of Exile On Main Street, but what they got was a band lost in showbiz.

Shock and awe then, when, in 1978, the Stones delivered Some Girls. An archetypal return to form, a sharp, streamlined, back to roots album, occasionally bending the music of the disco dance floor into the shape of rock’n’roll, as if to confirm that not only were they still in touch with the zeitgeist, but that they were grabbing it with both hands.

Over two nights in 1978, again in Fort Worth, Texas, the band recorded their Some Girls‘ gig, and naturally, almost every track on this six million selling album made it onto the set list, plus some well placed classics: a strangely mannered and stripped back, but still electric (in both senses of the word) ‘Honky Tonk Women’, a speeded up, helter skelter ‘Brown Sugar’, and a rhythmic, growling version of ‘Jumpin’ Jack Flash’, it too on warp speed. These latter two signature Stones’ tracks close the show. The band accelerate through them like some distant finishing line had just come into focus, or maybe they just wanted to get them in before the lights went out.

And even in this company, 3 of the Really Big Songs on Some Girls are Really Big Songs on this live recording – there’s a satisfyingly stretched out version of ‘Miss You’, treating us to the bittersweet sound of a supple melody swaying across the disco dance floor, and ‘new boy’ Ronnie Wood’s pedal steel guitar is much more upfront on this live version of ‘Faraway Eyes’, further authenticating Jagger’s biting, satirical lyrics. But the real standout here is ‘Beast Of Burden’. Influenced by Philly soul and the music of the American south, Jagger sounds like he’s emerging from the shadows to unload that very burden he’s lyrically unwilling to carry. It’s notable that the studio album was recorded in New York, and Jagger’s lyrics primarily pick at the city’s seedy underbelly, but he softens up on ‘Beast…’ giving a tender and liberating vocal performance.

Again, what was originally on Video/DVD only has now been released on CD. 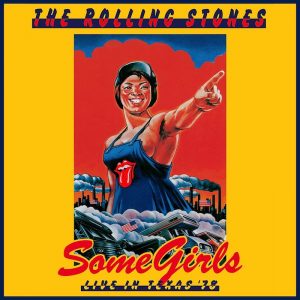