Offhandedly described as Roger “having bit of a whinge” by David Gilmour, Pink Floyd’s The Wall originated out of Waters’ feelings of disaffection with playing to large audiences in vast stadiums. And so, to tackle these feelings of isolation and despair, what did he do? He decided to build a wall between the band and its audience. Brilliant. Genius. What’s next, Roger? Kill the audience? Nah, we’ll leave that to Judas Priest. Presenting the band with two new concepts in 1978, fortunately for us it was Waters’ Bricks in the Wall concept that Mason, Wright, and Gilmour went with (the other became Roger Waters’ first solo effort, the lamentable The Pros and Cons of Hitch Hiking; neither nudity nor Eric Clapton could save that one). Developed with producer Bob Ezrin, the storyline of The Wall is vast, incorporating everything from the childhood experiences of school, an overprotective mother, the absence of a father lost during WWII, failed marriage to the disillusionment with the spoils of rock stardom, alienation, and madness.

Staging such a complex piece of work was given the full Floyd treatment. In the early 80s, Waters did exactly what he said he would and built a 40-foot-high wall between the band and its audience and projected Gerald Scarfe’s animations of Waters’ lunacy across the damned thing. He did it again in 1990 against a 500-foot-long, 82-foot-high wall in Berlin to commemorate the fall of the Berlin Wall, the album’s refrain of “tear down the wall” emphasising Waters’ political leanings. Though ambitious (an understatement if ever one were made) and an impressive sight to behold, it’s not the best rendition of the work. Maybe Waters thought so too because in 2010, he picked up his trowel, packed up his hod, and oiled up his wheelbarrow for The Wall Live tour. Three years later and Waters is back in London for what by all accounts may very well be his swansong.

The master of ceremonies’ voice is almost drowned out as he attempts to advise us to turn our camera flashes off. Two soldiers emerge dragging the stuffed Pink doll to cast it down centre stage for judgement, the famous ‘I’m Spartacus’ speech emphasising Waters’ desire for unity amongst humankind. ‘In The Flesh?’ is rock mythology embodied; from the boom of the music to the retina- singeing flash of the pyro, it is ostentatious in every way. Waters walks on to enormous applause and dons the long leather jacket adorning the dummy centre-stage. The space cadet glows, the charade begins, and we give ourselves over to that warm thrill of confusion. And how could we not? Giant hammers adorn the circular projection screen, huge anti-capitalist and anti-war slogans are splashed across the wall that stretches the width of Wembley Stadium, and a troupe of black-clad flag-bearers stand aloft, their domineering menace bearing down upon us all. Waters sings – and he is in fine voice – and the show is more rally than entertainment. Whether we like it or not, we are under Waters’ dictate. An airplane crashes into the wall and explodes – yes, really! – and we are alone on ‘The Thin Ice’ with all the spectacle and grandeur dragging behind us as we are drawn deep into the emotional waters of the album. “Is this not what you expected to see?” Nope, this is much more. 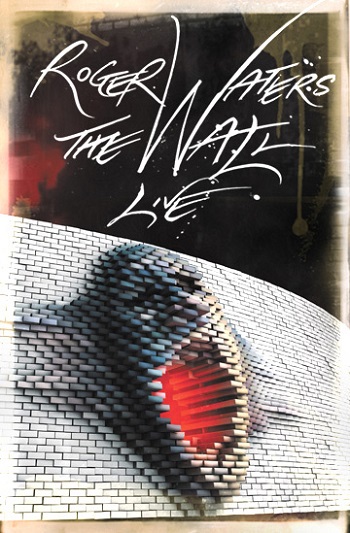 Oceans of blood flood the wall as one brick and another and another are put in place. A giant inflatable teacher emerges from behind the wall, his dark sarcasm cast over the youthful chorus singing their disdain at an oppressive education system. With an audience craving the footage of the gigs in the early 80s to be released as a DVD (or is that just me?), Waters accommodates us in albeit a minor but very impressive way by singing along with the “poor, miserable, fucked up little Roger all those years ago” of 30 years ago projected behind him in ‘Mother’. As he does so, mother watches from the wings. Providing comfort and caution, her piercing glare is that of the self-inspecting gaze of the voyeuristic and self-condemnatory CCTV/Big Brother generation.

With ‘Goodbye Blue Sky’, the bombers that besiege the wall drop dollar signs, the Mercedes logo, Shell Oil’s logo, crucifixes, the star and sickle, and the Star of David down upon us and the megalomania and narcissism of the rock star is set aside as Waters takes a wide swipe at the ideological state apparatus that dominate rather than serve mankind. Confrontation and controversy have long been his bedfellows, Waters’ political leanings have always been apparent in his works, and this show has been no different, members of the Jewish community taking umbrage at his inclusion of the Star of David here as well as on the infamous inflated pig.

Gerald Scarfe’s erotic and violent animation dwarfs the crowd for ‘Empty Spaces’ and ‘What Shall We Do Now’ – a great track sadly omitted from the album because of the time constraints of the vinyl format – and while the pornographic imagery of ‘Young Lust’ confronts as much as it thrills and the violence of ‘One Of My Turns’ serves as little in the way of catharsis, ‘the discomforting vacuum of ‘Don’t Leave Me Now’ is harrowing. The wall almost complete with but three spaces allowing a restricted view of the band, the rejection of the audience is tangible, the experience distressing. Even the anger of ‘Another Brick in the Wall pt.3’ manifest in a Wembley-wide smashed TV screen proves futile as the final bricks are laid and Waters bids goodbye to the cruel world to which he abandons us.

And there we remain, uneasy, unsure how and unable of responding to ‘Hey You’ and the obstructions that constitute this mammoth structure before us. While the beautifully melancholic ‘Is There Anybody Out There?’ sees two bricks temporarily removed to provide a peak at the guitarist, a whole section of the wall opens up for the rock star’s hotel room to appear for ‘Nobody Home’. But it is ‘Vera’ and ‘Bring The Boys Back Home’ that are the most moving tracks in the show, footage of soldiers being reunited with their children, images of the starving and destitute, and anti-war slogans projected across the entirety of the wall. And as touching as it is, ‘Comfortably Numb’ is up next and I dare say everyone is thinking the same thing: Will he? Won’t he? No he won’t. There’s no appearance from David Gilmour for the solo (bugger!) but Dave Kilminster does a sterling job of reproducing the much-celebrated lead break and adding a few tasty touches of his own.

Oh well, the show must go on. ‘In The Flesh’? Isn’t this where we came in? The flying pig emerges to hover over us, and, having undergone a few modifications largely in the genital area since Waters and the other PF members parted company, thankfully the thing isn’t able to shit on us. Instead, the despotic Waters machine guns his audience and what choice have we but to ‘Run Like Hell’ with the herd rabidly tearing apart the pig that has descended upon them? ‘Waiting For The Worms’ is a parody of fascism, dictatorship, and blind nationalism, its darkness spreading across the wastelands over which the marching hammers stamp their devastation. With the Pink doll appearing atop the wall for ‘Stop’, Gerald Scarfe’s marvellous animation sequence for ‘The Trial’ from the feature film is given dominion and Waters, alone, gives an, erm, “interesting” performance of those called to give evidence against him. Scottish for the teacher, French (I think) for his estranged wife, and an over-emotional mother, the man’s talents know no bounds (Alistair McGowan’s not got much to worry about). And with the wall finally torn down, Waters and co. meet us with a humble rendition of ‘Outside The Wall’ for the much-deserved rapturous applause.

What can be said about such an experience? As a spectacle and as an experience, it’s unparalleled. And musically, well, it’s Pink Floyd. I may be biased – no, I am biased; Pink Floyd are the best band ever to exist – but try as they might, while the rock giants of the twentieth and twenty first centuries may be able to match it visually, none will match it in terms of musicality, theatricality, or sheer substance. As show and as statement, The Wall stands as tall as the walls that divide us. And will do for a long time to come.