After his mammoth tour of the world’s stadia with a live version of The Wall, Roger Waters took time out to record a highly praised album of new material, Is This The Life We Really Want, and promptly set off another huge tour, taking in North America and Australasia, before bringing it to Europe in 2018, with the Birmingham Arena show to be the last one of the British leg. The tour as whole was billed as the ‘Us And Them Tour’, which seems to have a few interpretations. Not only is it one of the best and indeed most important songs on DSOTM, it also appears to be a reference to the refugee crisis in Europe, and it’s not much of a reach to see it as a reference to the difficult relationship Waters has had with his former Floyd bandmates over the years. He promised a lot of the set would be devoted to his time in the band, and as the set went on, he proved to be very true to his word.

As the house filled up immediately prior to the advertised start time of 8.00pm, the screen at the back of the stage, one of the biggest I’ve ever seen at an indoor show, came into life, showing a single figure sat on a deserted beach, with the sound effects of the sea, wind and birdlife, filling the hall via the surround sound PA. While the sound effects built up very gradually, the film lasted around 20 minutes, although there was a false alarm after around a quarter of an hour when some of the crew appeared and were mistaken for the band by some of the more restless members of the audience, who cheered them loudly. Eventually the gulls gave way to the unmistakeable heartbeat and effects of ‘Speak To Me’, the opening piece on ‘Dark Side Of The Moon’, the band themselves took the stage and the show was properly underway, as Water’s nine piece band moved smoothly into ‘Breathe’. 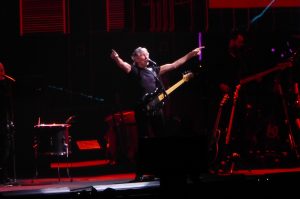 At first it seemed that the first part of the show would be a play through of the first part of DSOTM, which was nearly the case, but ‘On The Run’ was replaced by ‘One of These Days’, which had the unusual sight, and sound, of two bassists in action at once. ‘Time’ sounded magnificent, including Dave Kilminster’s exemplary guitar solo, but there was another surprise for ‘The Great Gig In The Sky when the two backing vocalists, Holly Laessig and Jess Wolfe, from the US band Lucius, sang Claire Torry’s famous vocal solo together. Suffice to say this earned a standing ovation from the crowd. After that the atmosphere changed rapidly as the stage and hall were flooded with red light for ‘Welcome To The Machine’, with the added bonus of the original animation on the big screen.

After that the show turned its attention to the new album, beginning with ‘Déjà Vu’, with Waters sounding quite Dylan-like at time, then came the return of the beach film for ‘The Last Refugee’, with Kilminster becoming the third bass player of the evening. The lightshow began to make its presence felt for the first time in ‘Picture This’, before it was back into the past for ‘Wish You Were Here’, with Waters allowing the crowd to take most of the vocals. Toward the end of the song, hooded figures in red jump suits began to fill the darkened stage, introducing ‘Another Brick in the Wall’, making clear parallels, alongside the on-screen visuals, with Guantanamo Bay and President Trump’s proposed border wall. As the song came to an end, the figures removed their hoods and suits, to reveal T-shirts with the slogan ‘RESIST’, a simple stunt but effective. A mention too, for Kilminster’s immaculate rendition of David Gilmour’s guitar solo. It was at this point that Waters himself spoke to the crowd for the first time, firstly to introduce the t-shirted figures as local students, then to announce an interval. 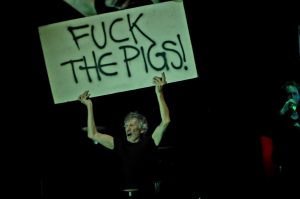 During the break, the screen displayed a series of political quotes and slogans, some of which might have been more effective with some proof reading (it’s ‘death throes’ not ‘death throws’, for example), then the second half began with the major set piece of the show, as a gantry stretching the whole length of the arena was lowered transforming itself into a representation of Battersea power station, complete with smoking chimneys and projection screens along the sides and the legendary pig hovering nearby. This signalled that this part of the show was to be devoted to the ‘Animals’ album, beginning with a tremendous ‘Dogs’ and followed by ‘Pigs (3 Different Ones)’, but aside from another terrific solo from Kilminster, it also included a strange piece of theatre as several of the band donned animal masks and indulged in a cocktail party at the side of the stage. As this was going on, there was another pig flying around the arena, this time a drone, rather than suspended from cables as in earlier years, although the power station did spoil the effect a little. 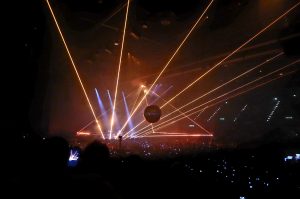 After the Animals segment, it was back to DSOTM for ‘Money’ and ‘Us and Them,’ which not only saw some more of the original animation on the screen, but also the introduction for the first time of Ian Ritchie on sax, who did an excellent job, especially on the ‘Us and Them’. There was one last new song at this point, ‘Smell The Roses’ which featured Waters in shackles and chains at one side of the stage, before the last two songs from ‘Dark Side…’, ‘Brain Damage’ and ‘Eclipse’. During these songs, the ‘power station’ slowly’ retracted back toward the roof and at the climax of ‘Brain Damage’ came probably the best and most stunning stage effect of the show, as a prism made of lasers was projected over the front stalls, with another laser creating the rainbow effect. A simple device, but it looked stunning and created a tremendous end to the show. The single encore, after Waters took the time to introduce his band, was, perhaps predictably, ‘Comfortably Numb’, which for a song dealing with personal isolation and alienation, always becomes uplifting and anthemic, and while Dave Gilmour’s original guitar solo is iconic, Dave Kilminter’s version own version lost nothing in comparison. A great end to a memorable show.

As an example of an arena show, this was a great experience. While you can’t go far wrong with this particular back catalogue, the effects were spectacular, the musicians excellent, particularly Dave Kilminster and Ian Mackie, and the sound for an arena show was almost unbelievably good. My one criticism would be that the sheer size of the show made things a little soulless and impersonal, and perhaps a little more interaction from the musicians and Waters himself with the audience might have improved matters, but as a spectacle, with some tremendous music, it really was quite a show.