Waters’ works have never been an easy listen. But neither have Mason’s, Wright’s or Gilmour’s. Mason’s albums are negligible; Wright’s works, though musically interesting are ploddy, largely flat, and swathed in pathos; and Gilmour’s albums, though much better than the rest, are okay, great occasionally, almost an adequate substitute for that Pink Floyd album we’re never going to get (The Endless River is more an overview, a retrospective than it is an original album). Across his solo works, Waters has surrounded himself with an army of excellent musicians, vocalists, and, tellingly, outstanding guitarists: Eric Clapton, Andy Fairweather Low, and here, Jeff Beck. But they are far from what he achieved with his former band. As a fan of close on thirty years, I’ve wanted to like them all but if there’s one thing that their solo albums – as well as The Final Cut and to some extent The Wall – prove, it’s that Pink Floyd were a band whose whole remains to this day so much greater than its individual parts.

All whispers, moans, and the occasional burst of rage, 1984’s The Pros and Cons of Hitch Hiking – rejected by Mason, Wright and Gilmour in 1979 in favour of The Wall­ – is a dull and inert album that neither nudity or Eric Clapton could save. Released just a few months before the Gilmour-led Pink Floyd’s almost-good A Momentary Lapse of Reason, 1987’s Radio K.A.O.S. may have been ill-timed but it’s a better album than its predecessor – just. The story and the radio show gimmick almost make it interesting but in trying to produce a “modern” album, it’s stiff, plastic, and produced to death. Even Waters himself dismissed it, saying that he and co-producer Ian Ritchie “really fucked that record up”, so much so that he “should never have made that record.” Though it has its merits, it’s difficult to disagree.

With Amused to Death taking its inspiration from Neil Postman’s book Amusing Ourselves to Death, Waters hit on his best idea since his work with Pink Floyd in the 1970s that allowed him to say something with such gravitas that it is still relevant – if not more so – today: the media’s management, manipulation and murder of the masses. What better way to approach it than again arm himself with a cast of excellent musicians and a guitarist that’s on a par, perhaps better, than Gilmour: Jeff Beck. After Pros and Cons… and …K.A.O.S., it appears that Waters learned his lessons well and struck a balance between concept, lyrics, music, performance, and production.

An album that Waters claims has been long underrated and is on a par with Dark Side of the Moon and The Wall, lyrically and conceptually it may be but it’s closer to the latter than it is the former – and still a distant third. As an ideas man and a lyricist, Waters has few equals. As a musician, well… While Waters continues to contest the myth that Gilmour was the musician in the band (with the help of Wright) that gave life to his songs and elaborate concepts, surrounding himself with outstanding musicians – Beck is, as ever, incredible – and a skilled production team and a shiny remaster can’t hide the fact that The Wall was the last album Waters wrote of any significance (Animals is much better). Suffice it to say that like its concept, the album still stands today and while not a great album, nowhere is it bad. But it’s far from exciting.

This 2015 edition features a new 5.1 surround remix of the album on high-definition Blu-ray audio and a new remastered stereo mix completed by long-time Roger Waters/Pink Floyd collaborator and co-producer, James Guthrie, as well as updated cover and gatefold art by Sean Evans, the creative director of Waters’ 2010-2013 The Wall Live tour and movie. Buy it if you’re a fan. 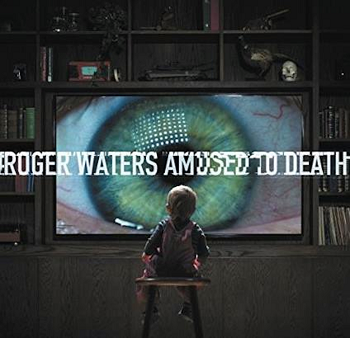