The Glastonbury Abbey Extravaganza is an open air concert put on in the Abbey grounds by Michael Eavis as a thank you to the local people, and each year he invites back one of the major acts from the main Glastonbury Festival.

First on were Wildflowers, a folk rock band with origins from the Bristol region. Their set is pleasant enough, and they seem to do a good job of warming up the crowd. They seem a little familiar, but I can’t place where our paths have crossed before. Although singer Siddy Bennett has a good enough voice, she lacks the power to really make a lasting impression tonight.

Next up is another Bristol act; George Ezra, who proceeds to put on a display of one of the dullest, most lifeless performances I’ve ever had the misfortune to witness. Mumbling in monotone throughout every lyric, it gave the impression that he had zero interest in being on the stage. While I’m sure this wasn’t the case, the lack of effort displayed on stage soon reflected with the reduction in polite applause. Things took a turn for the worse when he chose to perform some songs without his band, making it even more painful. Personal taste is one thing, but the complete lack of passion or enthusiasm was the real turn off here. 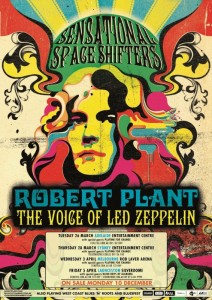 Thank heavens then for good old Percy, whose Sensational Space Shifters have been creating a big stir of late. With a select few dates last year and his spot at Glastonbury last month, there seems to be renewed interest, and with very good reason. The band fit perfectly mixing in all of Plant’s finest attributes in a blend of Blues, Hard Rock, Americana and Ethnic influences.

There’s plenty of Zeppelin in the set; all reworked of course to differing degrees, and there’s plenty of highlights; hearing Plant sing his way through ‘Going To California’ with a summer evening breeze on your face and a faint whiff of dope hanging in the air is a moment of magic, the kind that sends shivers down your spine. Robert had presumably had a quiet word with the (Norse) Gods; the day remained dry, and the deluge of Hurricane Bertha took a break between the gates being opened and held off until his set and the customary fireworks had finished.

Opening with ‘What Is And What Should Never Be’ and followed by ‘Turn It Up’ sum up perfectly how Plant, while acknowledging the past, has always been moving forward. More new songs in ‘Rainbow’ and ‘Little Maggie’ serve to whet the appetite further for forthcoming album Lullaby and…The Ceaseless Roar. They mix in perfectly with the better known tracks; some of which take the crowd a while to recognise in their current guise. Liam Tyson leads the band with the acoustic ‘Babe, I’m Gonna Leave You’ and Plant’s vocals are perfection. It’s a real delight to watch (and listen). Special mention must go to Justin Adams for his incredible lead on ‘Fixin’ To Die’ which would have been good enough in itself to end the night, but that task was given to the more familiar ‘Rock N Roll’.

Having witnessed the Sensational Space shifters in Wolverhampton last year, I rated it as one of the best performances I’ve ever seen from Plant. Tonight they matched that. Anybody with a ticket to the shows later in the year are in for a treat, and if you haven’t got a ticket yet, you’re probably too late.