October 2016 saw Robert Plant and his Sensational Space Shifters donate their time and considerable talents to the David Lynch Foundation for his inaugural Festival Of Disruption – founded to raise money towards work to help heal post traumatic stress through Transcendental Meditation.

And transcendental here is the operative word. Plant and his band transcend genres and, indeed, the origins and boundaries of his work to create a trance-like, wholly individual sound and mood, demonstrated in glorious close-up on this release.

The relatively brief set (the producers of this DVD chose, bizarrely, to excise several songs from this release, including ‘Dazed And Confused’) is made up of a mix of Zeppelin classics and tracks from Plant’s then latest album, the brilliant ‘Lullaby…And The Ceaseless Roar’.

That organic blues/rock/Americana/worldbeat sound is conjured effortlessly. Plants relaxed, benign smile tells you how happy he is – pretty much since 2005’s ‘Mighty Rearranger’ he’d found his sound and has spent the intervening years tweaking it to perfection. After a gentle start, ‘Turn It Up’ begins to ratchet up the excitement. In Justin Adams, Plant has found his perfect post-Page six string foil – sharing his enduring love of global sounds and instrumentation, Adams can switch from Tuareg desert blues to John Lee Hooker boogies to muscular rock-outs…often within the same song.

Instruments litter the stage and are picked up and discarded as and when needed. Banjos jostle with mandolins and kologos. At one point the whole band play bendirs to create the strident yet wistful tribal sway of ‘Rainbow’ while Plant, ever the musical magpie, slips in a line or two from 50’s doo-wop hit, ‘Sea Of Love’.

The Zeppelin tracks are rejigged and cleverly updated, retaining the sound and feel of both the mighty Zep and the Space Shifters. They are rejuvenated, respected and brought into the now. ‘Black Dog’ is heavy, trippy and shows that Percy can still “hey baby” like it was 1971. ‘Babe, I’m Gonna Leave You’, always one of Zeps more epic songs, doesn’t get spared the horses either, Plant slipping happily into ‘Golden God’ mode while Liam Tyson gets to showcase his formidable flamenco guitar skills.

Adams peels off a Muddy Waters riff before launching into ‘Whole Lotta Love’ while Plant vocally rolls back the years, injecting snippets of ‘Mona’ into the fray. But this, after all, was what Zeppelin did with this track live – sampled and referenced their influences. For an encore we get a blissful, note perfect reading of ‘Going To California’.

Decades into his fascinating solo career and Plant – the restless quester, the constant searcher – has found his band, his sound, his place. His muse is served perfectly. Brilliant individual musicians, together the Space Shifters sound extraordinary, while Plant has never sounded as comfortable or sure of his abilities. Although not, you expect, at all content to rest upon his laurels. The journey continues. 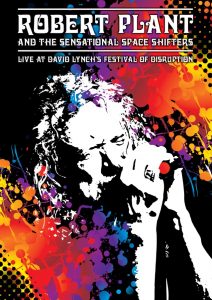