Pretty good tune huh. Check shirts, facial hair, backing vocals and the spirit of The Eagles being summoned with a down home, gritty insouciance. Welcome all to the world of Robert Jon & The Wreck, a slick, smooth, feel-good world of Country, Rock, Soul and a whole gumbo of other good grits. Pull up a chair, crack open a cold one and prepare for a warming dose of Southern hospitality…via Orange County.

This is album numero five from the Californian 5-piece and, if you’re not familiar with their follicularly over-endowed take on Southern rock, then this is the perfect place to jump in because, dang, if they ain’t just broken in their wildest mustang yet!

So, enough of the bad Southern metaphor’s, let’s get to the music. Cos butter my ass, boy, and call me a biscuit, this right here is some good sheee-it…sorry.

Let’s try again. We’ve already mentioned The Eagles and they are perhaps the most noticeable influence, RJ’s voice has definite hints of Don Henley – it’s warmth, it’s accessibility, it’s lazy cool. And the overall sound, authentic yet polished, chock full of memorable melodies and choruses. The musicianship, too, is unshowy yet head-turningly killer.

There are other touchstones. The twin lead guitar harmonies of The Allman Brothers are never far away (the intro to ‘Do You Remember’ is pure ‘Ramblin Man’). There is Country. Lot’s of Country. There’s raw, garage, gutbucket soul and note perfect Gospel backing vocals. There are also several main types of song…

There’s your flawless Eagle-esque soft rock. Full of gorgeous piano and rough edged slide guitar. There are touches of boogie and even, at one point, a bit of a glam stomp. An uninhibited Stax style horn section appears for one song. Many songs build to joyous crescendos, the band reaching to the stratosphere to punch home a particularly emotional point before easing back down to the back porch.

There is also a soupcon of professional, chart-oriented contemporary country. I mean, come on, ‘Tired Of Drinking Alone’ was never really going to be anything else. That and ‘This Time Around’ could quite happily nestle amongst the playlists for evening Radio 2. Bob Harris would love them. They’re mid-paced, almost balledic and focus on traditional country themes…drinkin’, lovin’ and reminiscin’ about the good ole’ days.

But there is also other stuff. ‘One Last Time’ almost slotted neatly into the Country file…until a black-clad monster riff kicked open the swinging doors of this particular saloon to usher in a seriously grunged-up, gnarly solo. It’s a high point on an already great album, showcasing a band unafraid to mix things up a bit.

Which brings us to the title track…or tracks. ‘Last Light On The Highway, Pts 1 and 2′ take the band into Prog Rock territory. It’s Pink Floyd playing The Eagles’ (yes, them again) ‘Journey Of The Sorcerer’. Pt.1 is haunting acoustics, echoey, mysterious while Pt.2 takes off for destinations unknown with a huge, string-laden riff. RJ&TW are clearly not averse to setting sail from the shores of predictability without a map! There are twists and turns, riffs and raging solos, sub songs and movements. There are gear changes and solo duels. It’s an experimental and expansive declaration of intent – it’s their ‘Stairway’, their ‘Rhapsody’ and will surely be immense when concerts become a thing again. Rush, Boston, Steely Dan – they’re all there, plus so much more. It finally ebbs back down to a lonesome flamenco style acoustic. And breathe…wow.

It’s the kind of song bands don’t write anymore and you feel that Robert Jon & The Wreck are the kind of band you don’t see too often these days either. Utterly modern yet stepping straight from the 70’s in all it’s anything-goes glory, they’re the real thing. Gifted, cool, fearless and blessed with an ear for a dynamite melody (while not being afraid of a toilet break solo or two), one can only mourn the live album they were going to record on their 2020 European tour. Jump on board now while you can still say “I knew them before…”. 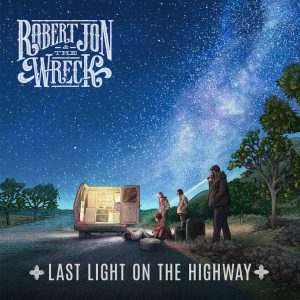