As bassist/vocalist Mariusz Duda said as the band began their show at the Assembly, it had been an ‘unhappy’ year for the band. Most acts in the same situation would have taken that as an understatement, to say the least, as it had been little more than twelve months since the very future of Riverside had been put into doubt by the tragic and untimely death of guitarist Piotr Grudzinki. The band decided to carry on, with session guitarists filling in, at least as far as playing live was concerned, and this short series of British dates formed part of a quite extensive European tour, with Maciej Meller taking on the guitar role.

There was no support, after an intro of a playback from the ‘Eye of The Soundscape’ compilation of improvisations and ambient tracks, the three permanent members of the band entered to a big and emotional welcome from what was a very sizeable crowd in The Assembly. You don’t often see a band take a bow before a gig rather than at the end, but in this case it seemed appropriate. Maruisz made his short speech, and then said that the band wanted now to tell their story and the set began with the band playing ‘Coda’ as a three piece, with Duda’s bass acting as lead. The album version of the song is quite short, more of a reprise of ‘Feel Like Falling’ than a song in its own right, but this version grew into something much larger, with the band beginning to build and improvise around the song, something they’d said in advance that they wanted to do a lot more of.

Maciej Meller made his entrance almost unobtrusively, to add some serious weight to ‘Second Life Syndrome’ which had echoes of Steven Wilson and even the Floyd at their most intense, and then the band had obviously hit their stride as we were treated to an absolutely glorious ‘Conceiving You’, with Duda’s melancholy and wistful vocal contrasting with the majesty of the music. Meller, to his credit, played his role perfectly, never attempting to impose himself or seek the limelight, he just did his job, adding some excellent playing to the overall sound. The band have said that in future Duda will play guitar in the studio, but if that changes, I’d like to think that Meller has more than played himself into contention for a more permanent role. 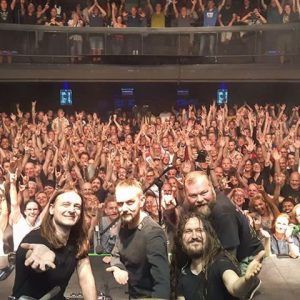 The idea of telling the band’s story could have meant the set might be a chronological journey through their music, but this wasn’t the case, although there was music from across the band’s career, right up to their last studio album ‘Love, Fear And The Time Machine’. It was a long set, over two hours including the encore, but the standard never slipped below the superb, and there were so many highlights, from the gorgeous acoustic opening of ‘Lost (Why Should I be Frightened By a Hat)’ which blossomed to something almost symphonic in its scope, bringing to mind the mighty Anathema on top form, the insistent, almost industrial electronica of ‘O2 Panic Room’, moving onto ‘saturate me’, where the whole thing was driven by Duda’s inventive bass. Then there was a thunderous ‘Escalator Shrine’, featuring Michal Lapaj’s Jon Lord-like keyboards, and an absolutely mesmerising ‘Before’ to end the 100-minute main set. The crowd’s response was loud and long.

The one thing that might have spoiled this show was that for much of it, the sound wasn’t quite right. While Mariusz Duda doesn’t quite use his bass as a lead, it is quite prominent in the sound, but it was perhaps a little too loud in tonight’s mix, often drowning out the vocals, which was a shame as for my money, Duda is one of the best and most underrated singers on the scene. There was also the sense that there was an element of testing the water for the band, understandably establishing whether they wish to continue, at least as a touring band, and whether their audience will be behind them. However, the excellence of tonight’s show, and the warmth of their reception, both at the beginning and the end, should have removed any doubts. They are still a very special band, and this was an outstanding show, easily one of my best of 2017 so far.