Ricky Warwick has been busy of late; Black Star Riders, three solo albums and involved in the deluxe reissues of The Almighty’s Blood, Fire and Love and Soul Destruction. You’d think that given that busy schedule, with Black Star Riders between tours, he might take a little break. But here he is, with his BSR bandmate Damon Johnson, unplugged and dangerous.

As expected there’s acoustic renditions of Black Star Riders songs and some Thin Lizzy classics, but the set opens with an older Ricky Warwick song from his Tattoos & Alibis album. Following ‘Three Sides To Every Story’, Damon introduces a song by his old friend Alice Cooper. The duo are only joking when they talk about playing for seven hours, but everyone in The Iron Road seems up for it. ‘No More Mr Nice Guy’ is followed by the first BSR song of the night. ‘All Hell Breaks Loose’ and the other songs from the duo’s current band stand up remarkably well next to the numerous classic covers included in the set. 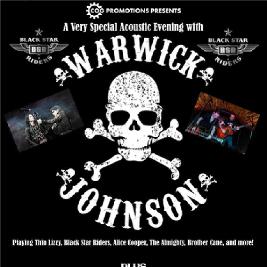 Lizzy’s ‘Borderline’ sounds wonderful and Damon and Ricky agree on it being their favourite Phil Lynott song. After ‘Jailbreak’ and ‘The Killer Instinct’ comes a Damon Johnson song called ‘Pontiac’. Ricky wishes it was one of his and tells us he’s going to steal it while Damon sleeps. Next are a couple of ‘Ricky’ songs, something old and something new. ‘Celebrating Sinking’ was co-written with Therapy’s Andy Cairns and appears on Ricky’s When Patsy Cline Was Crazy (And Guy Mitchell Sang The Blues). The night just wouldn’t seem complete without The Almighty’s ‘Wild And Wonderful’. Before Brother Cane’s ‘Got No Shame’ Damon explains to those of us who are unfamiliar, that it was their ‘Wild And Wonderful’.

‘Kingdom Of The Lost’ (“an Irish folk song written in Sweden” according to Ricky) is one of the strongest songs from the BSR debut and is a popular choice tonight in this stripped down style. Eddie Cochran’s ‘Somethin’ Else’ segues into ‘Summertime Blues’ before Iron Maiden’s ‘Running Free’ almost segues into ‘Breaking The Law’, but Ricky was just teasing us there. We’ve not quite hit seven hours but the length of set is almost Springsteen-esque so ‘Born To Run’ feels entirely appropriate.

A bar full of rockers singing ‘Whiskey In The Jar’ is a fine way to end the night. Black Star Riders return to the UK in December, supporting Def Leppard and Whitesnake, as well as a couple of headline shows of their own.