We all love a loud rock and roll show, but occasionally it’s good to experience something a little bit different.  ‘Different’ is what we get tonight, acoustic performances of some much loved classics, a few laughs along the way and some unexpected covers.

Before the first of the co-headliners, it’s Mark Curran (of the band Curran) who has the task of warming up the Slade Rooms crowd. As a solo performer his sound is a little bit Mellencamp, a little bit Springsteen, but most of all, Bon Jovi. From his opening song that name checks ‘Livin’ On A Prayer’ to covers of JBJ solo song ‘Destination Anywhere’ and ‘Blood On Blood’ the influence of his fellow New Jerseyite is clear. The latter is perhaps Bon Jovi’s finest hour, so it’s no surprise when Curran states that he ‘will go to his grave wishing he wrote this song’.

He may have given his initial ‘good evening Wolverhampton’ greeting to a near empty room, but that soon changed and if these solo support slots get people checking out Curran (the band) then it’s job done.

Acoustic TV is Tony Wright and Milly giving us an hour of acoustic Terrorvision.  The duo kick off with ‘Dog Chewed The Handle’ and ‘What Makes You Tick’. Then it’s the rarely-played live ‘III Wishes’ and some modern Terrorvision with ‘Babylon’ from the 2011 album Super Deluxe. Mid-set Tony promises that the next song will make us cry but actually it’s laugh a minute all the way through their set.

‘Little Things’ is introduced as Milly’s love song to Tony before a closing sequence of songs that starts with Terrorvision’s biggest hit, ‘Tequila’ before closing with the oldest hit ‘My House’. Bowie’s ‘Moonage Daydream’, ‘Alice What’s The Matter?’ and ‘Friends & Family’ are also given the Acoustic TV treatment. Tony Wright is hilarious at times, a particular highlight being ‘imagine Ricky’s surprise if he comes out and finds you all naked’. 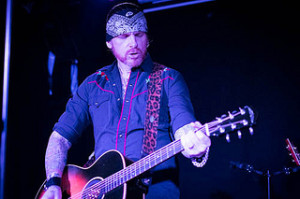 Black Star Riders frontman Ricky Warwick opens his set (to a fully clothed audience) with a cover of ‘Summertime Blues’.  Alongside some unusual covers, Warwick also gives the Slade Rooms a chance to hear of a couple of BSR songs live before the band play the Wulfrun in November, ‘Bound For Glory’ and ‘Hey Judas’.  While the covers tonight are fun, including a couple of Lizzy classics, ‘Jailbreak’ and ‘The Boys Are Back In Town’, it’s the songs from The Almighty that are shown the most love. Warwick tells the story of the writing of ‘Wild & Wonderful’ and it’s unlikely blend of Bryan Adams and Hanoi Rocks. ‘Jesus Loves You’ and ‘Free ‘N’ Easy are equally popular with his oldest fans.

The covers keep coming with Iron Maiden’s ‘Running Free’ followed the Motorhead classic ‘Ace Of Spades.’ Prior to this Warwick tells the story of the first time he met Lemmy. Sadly, many of the audience continue to chat between themselves while he shares his awesome tale.  When Maiden and Motorhead are followed by ‘Oops I Did It Again’, it’s definitely the most bizarre moment of the night.

‘Belfast Confetti’, ‘The Whisky Song’, and ‘The Arms Of Belfast Town’ represent Ricky Warwick’s solo albums, all displaying immense pride for his homeland. Springsteen’s ‘Born To Run’ is a simply awesome way to end the night.  Ricky Warwick returns to Wolves with Black Star Riders on 30th November, also look out for reissues from The Almighty later this year.