One hell of a classy piece of work

With a career in music spanning close to fifty years, Rick Springfield remains a somewhat under the radar superstar, a Grammy Winner back in the 1980’s, having topped the Billboard charts and multiple Top 10 albums he still doesn’t get mentioned nearly often enough in the same breath as other Rock Stars, but he certainly should be. His ability to tell a tale in a song is wonderful. Following on from 2012’s Song For The End Of The World this album is a little lighter in subject matter, and maybe aggressiveness but certainly loses nothing in power or delivery.

There’s a bit of a country element running through a lot of tracks on the album, certainly in the twang in a lot of the guitar sound, but that’s no bad thing, the sound is excellent throughout and Rick’s voice has deepened somewhat as he has matured, still remaining strong and most importantly very distinctive. At the end of the day Rocket Science is a guitar oriented Rock album containing some great tracks, well written and performed with passion. All summed up in the opening track and lead single ‘Light This Party Up’ which is a firey upbeat rocker that sets the scene perfectly. The sound is modern, but classic, passing through many different variations of style. At the end of the day like any Springfield album everything works at it’s best with his voice and guitar, but there’s just something really uplifting with this collection of songs.

Highlights include the smooth as silk pop rock of ‘Down’, another rocker ‘The Best Damn Thing’ which again features John Jorgenson’s pedal steel play, the very bluesy ‘Miss Mayhem’ which sounds so different to anything else on the album bit fits like a glove. ‘(I Wish I Had A) Concrete Heart’ which has a very commercial sound to it and finally the terrific ballad ‘Let Me In’ as you let this music sink into your pores it just seems to throw up something new each time, whether it’s picking out a solo you hadn’t focused on previously, or the subtlety of the vocals on a particular track.

Unlike some artists who have turned to Country Rock in an attempt to cash in on current sales trends, especially in the US market, Rick Springfield is merely continuing to create music that he loves and it fits so well, to some this may be classed as a bit of a mish mash with Rock/Pop/Country/Blues all present, but the flow of the music here is excellent, generally with the rock songs generating peaks and some of the slower or lighter songs painting a slightly different landscape, but an interconnecting one nonetheless.

It really is hard to believe that it’s Springfield’s 18th album and he can still sound this fresh and different, perhaps his other work as an actor and writer has ensured that neither his enthusiasm nor his vocal ability has waned over the years, continuing to play a significant number of live shows each year has kept his eye in so to speak. This is one hell of a classy piece of work and will hopefully bring Rick back to the UK when touring it later in the year. 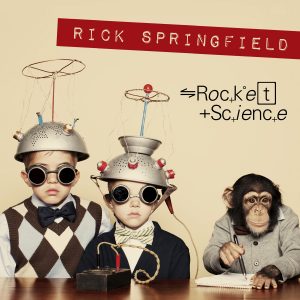