The ageing like a fine wine cliche is wheeled out again…

Any activity from Richard Thompson is cause for celebration and there is a great deal of it at the moment. Activity I mean…well, and celebration. I digress. Prior to his forthcoming UK solo acoustic tour we have the release of ‘Acoustic Classics II’, his follow up to 2014’s, urm, ‘Acoustic Classics’. And hot on the heels of both of these is the soon to be released ‘Acoustic Rarities’.

So, with ‘Acoustic Classics II’ Thompson doesn’t stray far, or indeed at all, from the original template. An enticing selection of Thompson and Fairground Convention classics played solely on acoustic guitar. But then what else other than his warm vocals and gobsmacking guitar does any folkie or 6-string afficionado really need? Nothing, that’s what, and thankfully that’s what you get…or don’t get.

For anyone in need of a brief history lesson, Thompson has long been our greatest best kept secret. From virtually giving birth to folk rock with a string of dazzling albums with Fairport Convention to his classic early albums with his then wife Linda and onto a continuous line of reliably brilliant solo albums. With the possible exception of ‘Henry The Human Fly’ he’s rarely put a foot wrong and still routinely finds himself in the upper echelons of every “greatest guitarist ever” polls. Yes, it is folk but Thompson is to it what Hendrix was to rock – an originator, a game changer and simply jaw-droppingly brilliant.

Seconds into opening track, ‘She Twists The Knife Again’, you can relax – safe in the knowledge that this safest of safe pair of hands shows no sign of faltering. The production is crystal clear and warm, the short, pacy lead track with its immaculate twin lead and rhythm guitar is the audio equivalent of a leather armchair and a generous glass of single malt – which, incidentally, is how this album should best be experienced. ‘The Ghost Of You Walks’ slows the pace for a gentle autumnal ramble with suitably hypnotic guitar work. Thompsons voice too is in fine form, a bit less folksy and mannered than it has been of late, which is a good thing.

Different songs here highlight different sides to Thompson. The Songwriter: his brilliance as a lyricist and wryly humorous and powerful storyteller shine through on songs such as ‘Gethsemane’ and 2007’s ‘Guns Are The Tongues’, staking his claim as one of the great post-Dylan writers. The Interpreter: several Fairport songs sound surprisingly different and fresh without the vocal presence of either Sandy Denny or Linda Thompson and shorn of additional instrumentation – be it electric folk rock flourishes or accordions and harpsichords. And last but not least, The Guitarist: the guitar work is subtly stunning throughout. You can hear the squeak of strings as he glides around the fretboard. ‘Gethsemane’, in particular, is incredible – the slightly swampy vibe of the electric original is recreated effortlessly here as he establishes his wizardry.

Without being critical or dismissive, these releases must be money for old rope for Thompson. A consummate musician, he can and indeed does play these songs with ease. Hell, he’s a folkie, if he couldn’t pick up a battered acoustic and bang these songs out there would be something very much amiss. But that’s only half the story – that misses the heart and soul put into these songs. The heartfelt vocals, the depth and range of the stories told and the sheer gossamer beauty and perfection of the guitar playing. The upcoming tour is sure to be an even greater delight, experiencing these songs in the presence of their creator, a fleet-fingered national treasure. Roll on ‘Acoustic Rarities’. 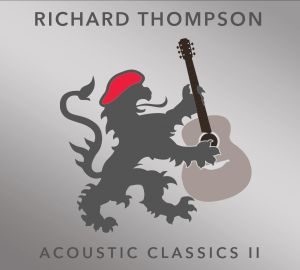