Rhapsody Of Fire lovers have eagerly awaited the debut release from Team Staropoli. To recap: it was an unexpected turn of events that no one foresaw. After ten albums bound to ‘The Emerald Sword’ saga and its sequel ‘The Dark Secret’, founding members Luca Turilli and Alex Staropoli amicably split and so we were left with two Rhapsody’s – Luca Turilli’s Rhapsody and Rhapsody Of Fire. For many fans this lead to doubts. How could the band function without virtuoso Luca, a key player in the writing process? Would the two bands end up sounding the same? And would the fans be able to accept two different entities? Luca Turilli’s Rhapsody got the ball rolling with the impressive Ascending To Infinity (2012) creating an ambitious fusion of sound dubbed cinematic metal and, now Rhapsody of Fire present their efforts with Dark Wings of Steel.

Where Turilli threw everything and the kitchen sink into glorious orchestrations, bigger and more grandiose than before, Staropoli has taken Rhapsody Of Fire in much more stripped back direction, whilst still retaining the epic musical elements that fans are accustomed to.  Stylistically this results in a somewhat “marmite” album that is as thrilling and satisfying, as it is underwhelming.

The album opens with a customary symphonic introduction piece, the dramatic and theatrical ‘Vis Divina’ sauntering into the divine first track, ‘Rising From Tragic Flames’. It begins boldly like ‘Dawn of Victory’ and ‘Aeons of Raging Darkness’ with a slight progressive vibe, before advancing with Fabio Lione and choir in tow. It then soars into majestic verses accompanied with subtle baroque undertones into the impressive chorus section. With trademark Rhapsody written all over it, it provides one of the albums best tracks.

The marmite-ness begins in the four track cluster of lengthy mid-tempo tracks that follow and venture away from the expected power metal territory. Instead we’re left with a low-key Rhapsody. Gone is the abundance of symphonic and classical elements bursting across songs and the guitar riffs too often chug endlessly without enough variety on the verses. The result is somewhat frustrating. These tracks drone on without leaving much of lasting impression, and though subsequent album spins are more enjoyable, it’s hard not to feel that low-key Rhapsody is all just a bit too empty and lacking the “fire” of previous releases.

Things pick up in the second half of the album with the faster paced and memorable ‘Silver Lake Of Tears’. The keys dazzle with conviction from the outset with Fabio Lione’s exquisite vocals and lyrics driving the song to great heights. Staropoli and new axe man Roberto De Micheli go to battle in a striking keyboard/guitar dual, with the latter showing off some impressive shredding. Ballad ‘Custode Di Pace’, sung entirely in Rhapsody’s native Italian, is no ‘Lamento Eroico’ or ‘Il Canto Del Vento’ but it’s hard not to fall in love with Fabio’s expressive and emotive performance. ‘A Tale Of Magic’ has more of an old school Kamelot quality to it – simple but very effective – whilst the impressive title track ‘Dark Wings of Steel’ picks the pace up again with plenty of varied riffs and fuller walls of sound. The result is a much bolder and more adventurous sounding track with an immense orchestral ending.

Fans bored of the cheesy dungeons and dragons lyrics and manic shredding will probably welcome this new sounding Rhapsody, but if you were hoping for some kind of neoclassical metal showdown between the two Rhapsody’s (think Mozart taking on Beethoven or Vivaldi vs. Paganini) you’ll probably be left disappointed… 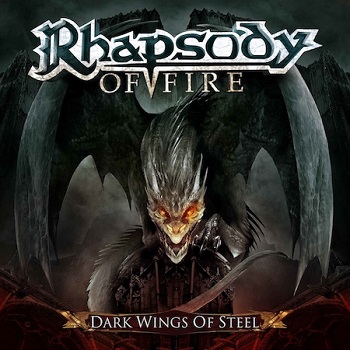