After seeing one of the best female vocalists of the more recent Progressive Rock era on Sunday, in form of Heather Findlay, 48 hours later The Robin played host to two of the best and most influential female singers of the 70s, Annie Haslam of Renaissance and Sonja Kristina of Curved Air. The Robin was in an unusual fully seated mode for this gig, and unlike previous gigs where this has been the case, the management had filled the floor with as many seats as possible, and even then there were people having to find room to stand at the back and in the space in front of the bar.

The billing stated that this show was a double header, but someone has to open the show and that honour has fallen to Curved Air on this tour. It was a little strange that the band minus singer Sonja Kristina entered the stage with the house lights still on, with the intro tape still playing, but they quickly went into the instrumental opener, ‘Spider’. The sound was a bit unbalanced at first, and when Sonja entered the stage for the second number, ‘Young Mother,’ her vocals weren’t at all clear, especially in the lower register. This was partially cleared up by the third song, ‘Stay Human’, but it remained an issue for most of the rest of the set. ‘Stay Human’, incidentally, is a newish song, included on the most recent album, North Star, and it was pleasing that both bands on tonight’s bill aren’t just content with being heritage acts, but have recorded new albums after having reconvened after a long interval. 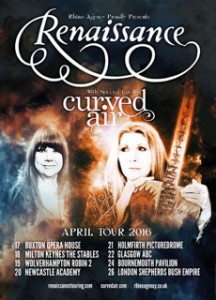 It seemed during this set that the crowd were very subdued, not even Sonja announcing ‘Melinda, More or Less’ seemed to arouse their enthusiasm, and, Sonja apart, the band found it difficult to try and rouse things, as the stage layout meant that both guitarist Kirby Gregory and bassist Colin Harris were almost obliged to be rooted to the spot, and although violinist Paul Sax was livelier, it was mostly his own reaction with the music rather than any attempt to engage with the crowd. Eventually there was a response when Sonja announced ‘It Happened Today’, and things livened up a little, but it didn’t help when, during the lengthy piano solo in ‘Purple Speed Queen’, the PA began to emit a peculiar sound, like a floor board creaking, whenever Rob Norton hit a low note. Even when they played their biggest hit, ‘Back Street Luv’, it didn’t quite work. I’m not sure what the overall issue was, the shortened set, the limited stage space, causing the band and Sonja in particular to feel a little confined, but I’ve seen the band play better shows than this.

Like Curved Air, the reconstituted Renaissance aren’t happy to just live off past glories. They recorded an album of new material a couple of years back and several of those songs featured in tonight’s 90 minute set. They’ve also overcome the blow of losing guitarist and guiding light Michael Dunford to a tragically sudden and early death in 2012. Tonight they begin with the aptly named ‘Prologue’, the opening and title track from the first album with Annie Haslam as singer. Although the vocal part has no lyrics (I’m sure there’s a technical name for this) it also involves a thorough testing of her vocal range, and this early in the set it did feel as if she were reaching for some of the higher notes, but as the set went on she seemed a lot more comfortable. Some of the newer songs featured quite early in the set, including ‘Immortal Beloved’, which sounded comparatively pedestrian in this set, ‘Grandino Il Vento’ (Harvest the Wind), which Annie described as going back to their symphonic rock roots, and ‘Symphony Of Light’, a song inspired by the life of Leonardo da Vinci. It’s quite a long piece, in several parts, and perhaps a little too theatrical in places.

The current line-up of the band is a six piece, with keyboard players either side of the stage. Perhaps oddly, Annie Haslam stands to one side of centre stage, next to Rev Tesar’s piano, while guitarist Mark lambert occupies the centre, despite only playing acoustic guitar and occasional backing vocals. At times he looked a little uncomfortable in this position, especially when he cast aside his guitar and, still centre stage, acted solely as a backing singer. It can’t be an easy role, especially when required to replace so influential a figure in the band’s history as Michael Dunford, but it was noticeable that as the set went on, he seemed to get more comfortable and the band as a whole began to warm to their task.

The band’s most successful song, ‘Northern Lights’ was played two thirds of the way through the set, introduced with a nice tale of Roy Wood having worked with Annie and influencing her vocal on the song. It was played fairly straight and acted as a nice counterpoint to another new song, ‘Cry To The World’, which increased the set’s momentum and was one of the best things they played. Another of their most popular songs from the band’s early heyday, ‘Mother Russia’, followed, and this was properly epic, with the band hitting top form, and an encore of ‘A Song For All Seasons’ ended things on a genuine high point. Maybe some might have been disappointed that they left out two more of their most popular and important numbers ‘Song Of Scherezade’ and ‘Ashes Are Burning’, although as both are over 20 minutes in length, fitting them into a 90 minute set might have proved to be a little difficult. Overall, this was a good gig, a chance to see two bands with celebrated pasts, yet who still have a lot to offer, and seeing two such fine singers was a pleasure in itself.