Taking its name from a tag line in a journalist’s review (not the David Bowie song), Strung Out On Heaven’s High (1980-1982) collects the three singles from short-lived post-punk band Religious Overdose. Originally released on Glass Records, the tracks contained on this compilation defined a generation, and they get a loving re-issue by Optic Nerve, on lovely splattered vinyl, and with posters and postcards too.

Although the early 1980’s have been airbrushed (Stalin-style) with neon pinks and blues, the reality was far grittier. The drama of inner-city riots, the systematic dismantling of British industry, and three million unemployed was played out beneath a permanently slate grey sky. I’d watch Wham! leaping around on Top Of The Pops, all toothpaste smiles and fluorescent socks, then look out my bedroom window, and something didn’t quite add up. Now, Religious Overdose, there was a band more in tune with the times. Formed from the ashes of the Northampton punk scene, their songs perfectly captured the prevailing sense of desolation and despair, and presented it in an equally disconcerting sound.

After their formation in 1979, Religious Overdose really hit their stride the following year when an association was made with London based label, Glass Records. The first fruit of that union was the ‘Control Addicts’ single. Powered by a relentless, razor sharp riff, it’s a song that cuts straight through your cranium and makes a beeline for your memory bank. It’s obvious why John Peel took a shine to the band, and his patronage helped the original 1,000, 7” vinyl pressing sell out, and in double quick time. David Hayes’ brittle electric piano was fundamental to the band’s sound, and especially on the singles flip, ‘25 Minutes’. Factor in Alex Novak’s ice cold vocals, and you have a group who mirrored the sense of urban decay, and while it wasn’t always a comfortable listen, it was always interesting.

By the time Religious Overdose recorded their next single ‘I Said Go’ (later in 1980) they replaced the drum machine with a real drummer (Pete Brownjohn), and it gave the band a fuller sound. Similar to The Fall (only less abrasive), ‘I Said Go’ was coupled with the haunting ‘Alien To You’, a track featuring creeping keys and Alex’s sinister, barely audible vocals. The post-punk template gave bands a lot of freedom and Religious Overdose’s final release found them spreading their musical wings. A 12” double ‘A’ side featuring two lengthy tracks; ‘In This Century’ found the band at their hypnotic best while ‘The Girl With The Disappearing Head’ ended their career on a typically cryptic note.

Popular culture moved pretty fast in the early ‘80s, and by the time 1982 rolled round there was a feeling that Religious Overdose had run their course, and band members moved on to new pastures, but not before leaving us these three singles. Forget Adam Ant, Bronski Beat, Culture Club and Duran Duran, Strung Out On Heaven’s High is the real soundtrack of the 1980’s. 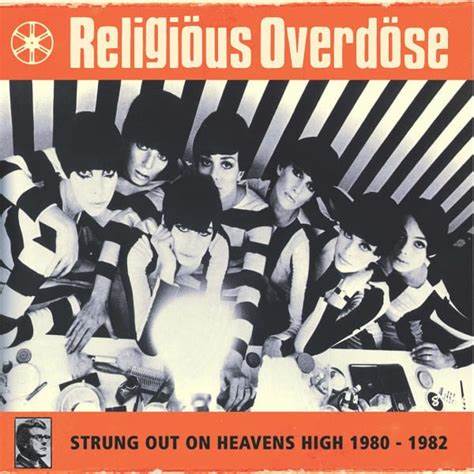