God damn! God Damn are God damn loud! A duo on record but a three-o on stage, these Black Country bashers bash the crap out of every instrument and every ear within this God damned building from the God damn outset. With mouthpiece Thom stomping and stamping between stage and barrier, not once does his T-shirt come untucked from his jeans. Impressive. More impressive however is that the amount of distortion on his guitar in no way diminishes neither the melody nor the might of his monstrous riffs. Equally impressive are the dungaree’d drumming skills of Ash. A skinsman (is that a word?) of boundless and indefatigable power, given the force that even the tickliest of tickles bestowed upon snare or cymbal produces, he must play with hammers. Surely.

The third of this eve’s three-o, skinny Cobain-nearly-alike (“we love”) Jamie brings more noise playing some noisy keyboard stuff and intermittently taking on guitar duties whilst Thom does his stage-stomping thing and scaring us all with his throat-torn bellowing and euphonious singing. With a bunch of tracks from new album Everything Ever (reviewed here) in the set, God Damn prove to be a band to contend with.

From a place not too dissimilar from the Black Country (he says with tongue very firmly in cheek), Miami, Florida’s Torche are up next and bring the riffage, the stoner heaviness and the sludge metal hypnotism. And for this, they get a growing crowd and a mosh-pit – a mightily impressive one-man mosh-pit for whom a space opens up on the floor as he plays his air guitar, throws the horns and dances like there’s no one else in the room. Torche are solid, tight, and, like their support band, very heavy – singalong heavy. With faster and catchier songs frontloading the set, the momentum ebbs and flows and the band drive us deeper through more of their heavier and dirtier material for the latter half. A sound that’s not so easily categorised, with as much pop-tinged melody and catchy choruses in their armoury as enthralling vocal harmonies, sludge-filth heft and down-trodden power, Torche hit home, and hit hard. Many a bobbing head in the crowd think so too and the mosh-pit grows a little. The journey through their eclectic oeuvre coming to a close, Torche get the applause they deserve and leave us to this eve’s headliners.

If you didn’t know already – or even if you do – Red Fang have a new album out on 14 October. And I’ve heard it. Dropping into the inbox two weeks ago, Only Ghosts has been getting a bit of a pasting. It’s a corker. If you’ve seen the video for ‘Shadows’ then you’ve got a pretty good idea of what you’re going to get: another great album from a great band with a great sense of humour. Yes, great. Lots of greats. Ten greats in fact. Each of them angrier and heavier and catchier and rockier and moustachioer (I think that’s how it’s spelt) and beardier (again, that’s a possible spelling) and stonier than the last. Had they chosen to release it sooner, I would wager that this crowd would have been crowding the merch stall ‘til the early hours determined to get their mitts ‘pon said pleasure.

Anyway, the band come on stage and, gents that they evidently are, take the time to shake each other’s hands. Lovely. Great. So, pleasantries performed, it’s to the music we go and Red Fang proceed to pummel us, pleasantly. Along with more bobbing heads and plenty more horns held high, that the mosh-pit rapidly develops from a one-man mess into a many-men-and-one-woman mosh-pit shows who most of the crowd are here for tonight. The energy of the room already at a high, Red Fang take it higher. “Rad shit! You say that here, right?” asks bespectacled bearded bassman Aaron Beam between songs. Well, maybe for this evening but probably not afterwards. Not much else is said but that’s because the music does the talking.

And while it speaks – loudly – a shirt comes off in the mosh-pit and the expression of amusement that once adorned the onlookers’ faces quickly changes to one of terror: somebody’s going to get that guy’s sweat on ‘em. Oh dear. Thusly, the circle opens a little wider. And the crowd goes wilder. And Red Fang continue to blast out track after hook-laden track from albums past and forthcoming to a crowd that hangs and headbangs on every beat. A seemingly effortless performance from a great band (told you they were great), God Damn were good, Torche were too, but Red Fang were… well, you know. (They were great, in case you didn’t get that. Yeah, I know, that was annoying…) 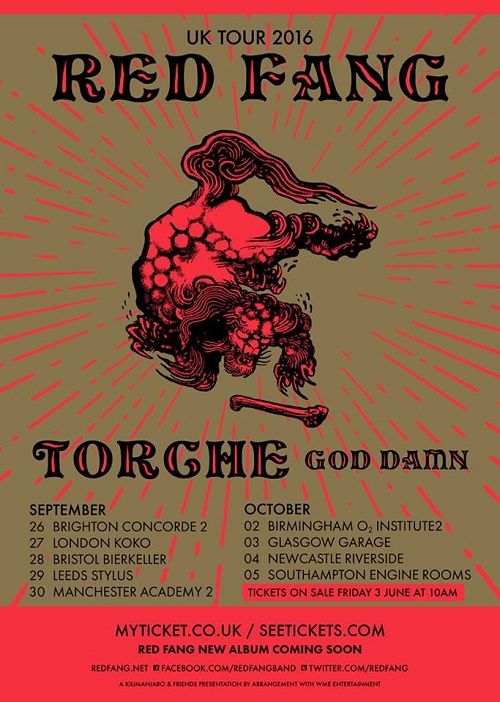