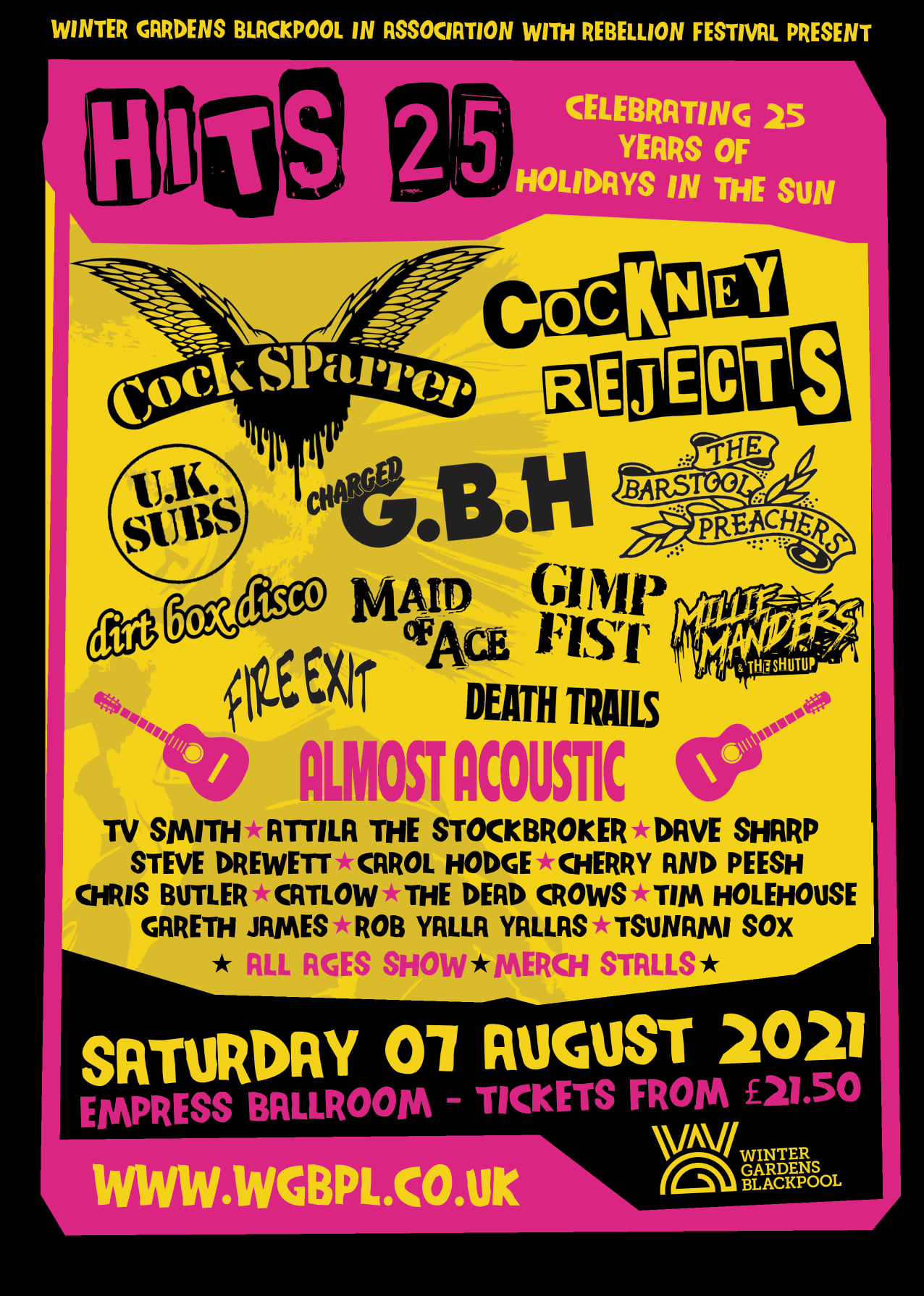 Despite Rebellion Festival being postponed again this year due to the ongoing restrictions with the Covid pandemic, one point that became clear to the dedicated organisers early on was that, festival or no festival, punks from all over the country were still going to head to Blackpool. Previously due to take place August 5-8 at the famous Winter Gardens, one of the things that makes Rebellion Festival different to many other music festivals is the undeniable fact that the audience, bands, promoters and everyone involved are all one big family.

Long established as the world’s largest punk festival, the fact that so many regular attendees were still prepared to come to Blackpool and support the city that has always welcomed them, and spend time with their extended punk family, without the festival even being on, meant that if it was possible to host at least some kind of gig for the people heading down, Rebellion would.

So, when news came that Covid restrictions were going to be lifted on July 19, Team Rebellion went into overdrive and have successfully pulled together in record time ‘Hits 25 – Celebrating 25 years since Holidays In The Sun’, the event from which Rebellion Festival was originally born.

To be held in the Empress Ballroom and an acoustic stage in the Pavilion on Saturday August 7, Cock Sparrer, Cockney Rejects, UK Subs, GBH, The Barstool Preachers, Dirt Box Disco, Maid Of Ace, Gimp Fist, Fire Exit, Death Trails, Mille Manders and the Shutup are all confirmed to perform, whilst the acoustic stage in the Pavilion will see TV Smith, Atilla The Stockbroker, Carol Hodge and more provide a more relaxed soundtrack.

It’s testament to the goodwill that the bands and audience have for the festival and with thanks to the Winter Gardens and Blackpool Council that they’ve been able to bring together such a strong line-up in such short time, for the incredible value of only £21.50 on the door, or online in advance with booking fee.

Rebellion Festival tickets have nothing to do with this gig. Rebellion 2020 and 2021 tickets remain rolled over to 2022. It’s only a one stage main gig, so capacity is limited and therefore there obviously won’t be as many tickets available as usual.

The Winter Gardens, however, will have FREE ENTRY for Thursday / Friday and Sunday, giving everyone a place to meet up and hang out on those days.

HITS25 is an All-Ages show with under 14s getting in free of charge. Everyone under 18 needs to be accompanied by an adult at all times.

Rebellion Festival 2022 is already well underway, and the promoters are rebooking many of the headline bands from the cancelled 2020/21 events and have also booked three bands that were not due to play either of those years. English rock legends The Stranglers and first-wave Los Angeles punks The Dickies are now confirmed to return to the festival in 2022 and are joined by Brighton folk-rock maestros The Levellers, who play the festival for the very first time.  The Levellers are still one of the most popular independent bands in the UK, and headlined Glastonbury Festival in 1994, where they performed to a record-breaking crowd of 300,000 people! Their anthemic, uplifting set is sure to be a highlight of Rebellion Festival in 2022.

These join returning and rebooked artists such as Circle Jerks, Bad Religion, The Undertones, Tom Robinson and Stiff Little Fingers, Ruts DC, Sham 69 and many more.

Rebellion Festival in 2022 will also see the welcome return of an outdoor stage, the council have agreed for the festival to have the area of the promenade right in front of Blackpool Tower (Tower Headland, on the ‘comedy carpet’). This is an amazing space for an outdoor stage. A straight walk down from the Winter Gardens. Rebellion can double the capacity with this area and have some fantastic plans to make both sites amazing.

For those who don’t have tickets rolling over from 2020/21, tickets for Rebellion 2022 will be available from August 5th.

Head to www.rebellionfestivals.com for more information.