Decent indoor gigs are at something of a premium during August but following on from last week’s appearance by Diamond Head this evening the Robin played host to Seattle’s finest. And with just three dates on this visit to the UK Queensryche were met with a decent sized and vociferous crowd at the Bilston club, who in turn were rewarded with an excellent career spanning show. Taking the stage alone Scott Rockenfield climbed behind his kit with a single strobe light on his head and started up a beat, soon followed by guitarists Michael Wilton and Parker Lundgren, bassist Eddie Jackson and last, but not least, vocalist Todd La Torre. 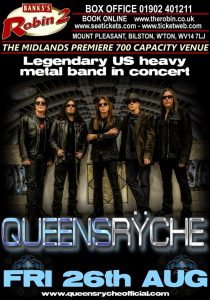 La Torre immediately stamped his authority on the opening ‘Guardian’ with its call and response hook and pounding rhythm and for anyone in the audience who was witnessing him for the first time he turned in a killer performance. ‘Operation: Mindcrime’ followed and from then on it was a show that celebrated both the bands early years and their commercial heyday with the likes of ‘Best I Can’, ‘Empire’ and a show stopping ‘Silent Lucidity’. With the old guard of Rockenfield, Jackson and Wilton doing exactly what was expected from them young guitarist Lundgren made a strong impression and it was good to see him playing with a smile on his face throughout. La Torre’s piercing screams on ‘Queen of the Reich’ almost ripped the roof off the venue and the momentum never stopped as they powered through ‘Jet City Woman’ and ‘Take Hold of the Flame’. ‘Screaming in Digital’ was arguably not the strongest choice to encore with but as they closed the show with ‘Eyes of a Stranger’ it was clear that Queensryche are very much back in business.

At just seventy five minutes the set was certainly on the short side and it would have been good to hear more from Condition Human and also something from the self-titled 2013 release. But with La Torre now very much identifiable as their frontman Queensryche have taken massive strides forward over the past couple of years and performances such as this will only enhance their reputation as a top-drawer live act.

Encore:
Screaming in Digital
Eyes of a Stranger