From the eerie shores of Lake Michigan come this rather tasty death metal outfit Psychomancer. Over their 22 year history the band have refined and honed their sound moving away from an avant-garde form of technical thrash towards a more direct and vicious form of death metal. This sonic shift has proved wise and it’s pertinent that their third full length, Shards of the Hourglass, was released on Halloween as it’s an album that stalks and stomps like Jason Vorhees on a brutal rampage.

A scything guitar riff and furious drum roll after furious drum roll heralds the arrival of Psychomancer and opening salvo ‘The Unsullied’. A swirling, brutal maelstrom it’s a sound that totally envelopes the listener and, like being trapped in a small room with a depraved serial killer, it leaves little room for manoeuvrer. However this four piece are not all about pure bludgeon and plenty of invention is immediately evident as the chromatic riff follows the suitably gruff vocals and a mid song bass run adds a respite of sorts as the band rally for another sonic assault. Like ‘90s Swedish death colliding with a Germanic thrash assault the aptly titled ‘Hell’s Venom’ picks up where the opener left off and swings with an inherent groove and drums that kick like an angry mare.

If Black Sabbath had played death metal I imagine it’d be akin to ‘Red Poem’. The sound of Psychomancer flexing their musical muscles it’s a track of monolithic proportions that drags itself along like a wounded giant. The perfect melding of doom and death it creates a heavy, oppressive feel that weighs heavy on the listener like a concrete overcoat. Powered by an insanely catchy, circular riff ‘Red Poem’ abruptly bursts into life at the 5 minute mark blast beating it’s way to a cataclysmic conclusion. In opposition ‘As Your Vital Signs Decline’ races out of the blocks and doesn’t let up. Like Immolation at their most frenetic it’s a furious slab of death metal, a skin shredding nightmare that’s sure to ignite pits wherever it’s played. ‘N.I.B.’ for the death generation the bass solo that opens ‘Faded Scars Return to Bleed’ masks the coming storm as surgical guitars slice a thick, treacly sound.

Technical without being complex the sheer variety of tempos and rhythms contained on this album ensures that Shards of the Hourglass avoids any accusations of geneticism as ‘The Castigator’ attacks like a Panzer division and the following ‘Deto-Nation’ thrashes like old school Overkill. With black metal blast beats ‘Myrmidons’ is something of a blitzkrieg while the ice white nuclear blast of ‘MK Ultra’ finishes off any survivors. Recorded at the legendary Iron Hand Studio producer Dan Klein has captured the live essence of Psychomancer especially on epic closer ‘Shards of the Hourglass’. Clocking in at 10 minutes it’s a song that structurally reminds me of Maiden’s ‘Rime of the Ancient Mariner’ insofar as that several, markedly different, suites are connected in a cohesive whole. With the song swirling towards it’s conclusion vocalist Duston Bullard’s sings the haunting refrain “Time gives what death will take” as the track sifts, like sand through an hourglass, yet for Psychomancer you feel this is a new beginning. 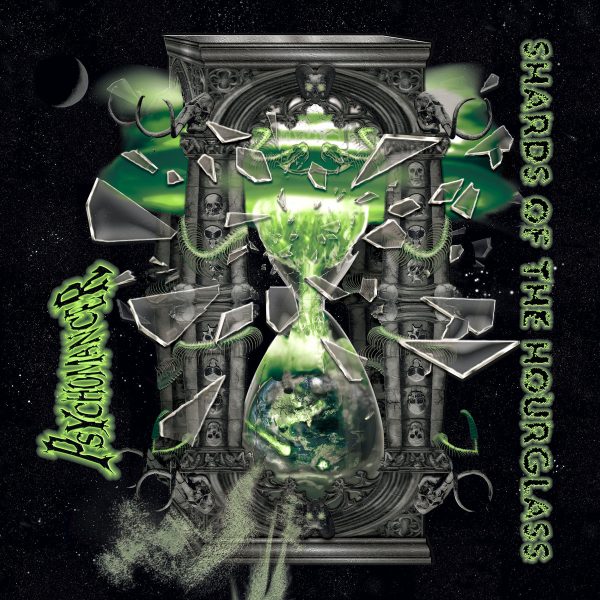