One of the abiding memories of Bloodstock 2011 is that of the beleaguered AA Nemtheanga conducting the massed hordes through a string of Primordial songs having himself been struck dumb by an untimely sore throat. Somehow, driven by Nemtheanga’s unrelenting enthusiasm, what should by rights have been a disaster in fact became a triumph even though what words the singer did muster sounded as though they’d been dragged screaming across a sheet of the roughest sandpaper in the hardware store.

Anyone who wishes to acquaint themselves with the unabridged Primordial stageshow, with Nemtheanga at his incorrigible best, can now do so thanks to the release of the band’s first live album Gods to the Godless, recorded at the Bang Your Head Festival in Germany last year.

What we get is an 80-minute masterclass from Ireland’s premier pagan protagonists, with the album’s title track launching the double album in exhilarating style. The more evenly balanced ‘Babel’s Tower’ is the first of three memorable songs from the band’s last studio release Where Greater Men Have Fallen. On ‘No Grave Deep Enough’ Nemtheanga can be heard rallying the troops as though preparing to go into battle, which the military kick of the bludgeoning drumming suggests that’s exactly what they’re about to do. A rousing riff cuts through the melee as Primordial whip up the levels of intensity while a healthy injection of Celtic tones sends  the emotion levels soaring once more. 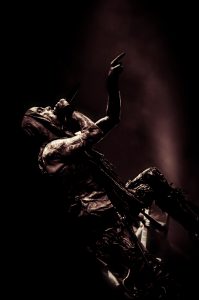 As any Primordial fan will tell you, Nemtheanga’s battle cry of ‘We are Nero, Rome is Burning’ signals the start of the sweeping ‘As Rome Burns’ the sound of which is enough to shake the foundations of the Colosseum itself as Primordial take a sonic ride in their time-machine back to more decadent and deadly times. By the time they reach the firebreathing chorus of ‘Sing to the Slaves, that Rome burns,’ played out over a rumbling percussive beat, it feels as though the roof’s about to come off the stage at Bang Your Head.

Nemtheanga is a consummate showman who injects emotion into his stage performance by the bucketload. Fortunately his levels of enthusiasm and passion are captured on Gods to the Godless which features some of Primordial’s finest songs since the band were formed in 1987.

Primordial’s songs are epic in the truest sense, grand compositions, usually lifted from history in which Nemtheanga brings characters to life and you end up instinctively caring about them as much as he does. ‘Coffin Shops’ is another example, a song that stirs slowly into life, before more and more layers and textures are woven into its fabric until the whole thing roars bursts its banks in scintillating and moving fashion.

As captivating as slow as when fast, ‘Wield Lightning to Split The Sun,’ flows majestically throughout before the flag is lowered in typically stupendous style with the uplifting ‘Empire Falls’, Nemtheanga urging the crowd to raise their fists before the riff sweeps in like a tidal wave to turn the pit into a baying mass of happy humanity.

The double album stretches to one hour and 22 minutes and if Primordial have not crossed your path before then this album is as good a place to start as any. One of the motivations behind the release was to join the litany of metal artists to have released memorable live albums down the years. In that goal, Primordial have achieved their ambition. 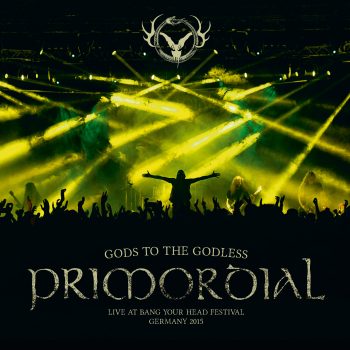