Tonight, we are invited to inhabit Pram’s rather splendid musical world as they play a hometown gig on their UK tour in support of their first album in eleven years, the rather splendid Across The Meridian, released just over a year ago. A combination of sounds from such diverse ends of the sonic spectrum from film score and 30s jazz to pop, electronica and experimentation, it’s otherworldly, dreamlike, and captivating. It’s strange. But the good sort of strange. It’s that type of strange – if “strange” can be typified – that compels and commands a curiosity that it simultaneously spawns, shapes and satisfies. Delightfully strange is probably the best way to put it.

And so, as one might expect, Pram’s stage is a delightfully strange thing too. While there’s the standard setup of drums at the back, vocalist front and centre, and guitar, bass and keyboards/synths either side, there’s some other stuff that don’t usually sit amongst the “standard” stuff, y’know, the “standard” stuff that’s more than capable of producing some weird and wonderful sounds and rhythms and melodies and harmonies when tickled correctly? There’s a trombone, a theremin, a flute, a clarinet, an accordion, a saxophone, a melodica, and something longish with a big ball near the mouth end where, as demonstrated, one blows through and fingers for melody. And with all of these toys, Pram proceed to make their strangely delightful sounds and recreate their delightfully strange world right in front of us.

It’s interesting to see how the audience responds to the music. Some sway, some dance, most stand in awe. One thing that is impossible to do is to not be captivated by it. Probably best to not operate heavy machinery while listening because once you enter Pram’s world, you’re in for all the pretty colours, and all the rainbows, and lots of sweeties and marshmallows. And there are lots of crayons for colouring in (and sometimes going over the lines too). There are cats that are as qualified as dolls to fly rocket ships, herds of imaginary animals sweeping majestically across luscious landscapes, huge-eyed faces painted in the cloudless starry sky, and a whole host of fantastic, surreal and happy-friendly-ghostlike figures on display in the wonderful world of Pram. For an hour or so, Kings Heath ceased to be. It was a little disappointing to have to leave Pramworld and make our way down the stairs and back on to the street… 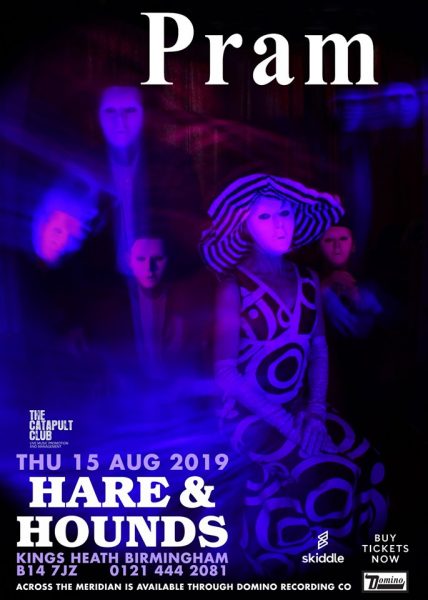