Poco, the band born out of the Buffalo Springfield breakup in 1968, went on to release 19 albums, yet never achieved the success their pedigree promised. They seemed to have everything going for them… Richie Furay’s spectacular vocals, Jim Messina’s songwriting nous and Rusty Young’s pedal steel … it looked like a combination that couldn’t fail. Even a close examination of this clutch of albums, originally released between 1972 and 76, fails to come up with any meaningful diagnosis.

The Epic Years begins with A Good Feelin’ To Know (1972), their fourth album. They’d brought in Canadian producer Jack (Starz/Alice Cooper/Bob Seger) Richardson to tone down the “country” and boost the “rock”, and it almost made it.

The Neil Young-esque ‘Ride The Country’ is a joyful 6 minute plus ramble through downhome country rock with a fabulous instrumental coda. That plus a reworked ‘Go And Say Goodbye” – a crunchy, poetic twist on Cowboy Rock – lifts the album. But the recording resolutely refuses to add up to more than the sum of its parts, and the band must have looked enviously at the soulful, cutting edge country rock as being presented by new band on the block, The Eagles, who’d just released their debut album.

Richardson again produced on next album, 1973’s Crazy Eyes. First album for newcomers, Paul Cotton and Timothy B Schmidt. Together, the ‘new’ band really got it down this time. They’d seen what The Eagles had to offer and rebooted their sound without selling themselves out, or indeed, short.

‘Here We Go Again’ shows off the kind of sweet harmonizing, tight interplay and imaginative arrangements that made this band unique. On ‘Crazy Eyes, the ten minute title track, Furay’s vocals coast along on a vapour trail of string soaked simplicity, thanks to Bob Ezrin’s spine tingling arrangement, revealing moments of great beauty and poignancy. One of Poco’s finest. Three high calibre tracks that didn’t make the final cut appear as bonuses here.

Despite Richie Furay’s departure (to join Hillman/Furay/Souther), or perhaps because of, Poco further developed into an extremely tight unit, musically. Clearly fired up by events, “new” boys Cotton and Schmidt up the songwriting ante on Seven. The sardonically brooding heartache of Schmidt’s ‘Just Call My Name, a carefully crafted rock-focused country song, provides an entertaining interaction with Cotton’s ‘Faith in The Families’, an elegantly fluid mix of latin, westcoast, and country that has a distinctly grown up resonance, adding real depth to the album. Rusty Young’s ‘Rocky Mountain Breakdown’, a genre piece that rattles along with gusto, buoyed on the glide and swoop of duelling fiddle and banjo, adds another wrinkle to the band’s expanding musical agility.

But fame and fortune continued to elude the band. Cantamos (1974) seems an almost ineluctable return to the studio, a retreat to the more traditional sound they started with. And surprisingly, it turns into a delightful, light on its feet little album. Rusty Young’s ‘High&Dry’ rises magnificently to punch above its high harmony weight and Cotton’s ‘One Horse Blue’ is a genuine “railroad tracks and cowboy hats” ride across the purple sage.

But it would be the band’s last studio album for the label.

Later that year, the band left Epic and signed with ABC Dunhill. The first album with the new label, Head Over Heels was a moderately charting success, providing the motivation for EPIC to release Live, a carefully curated 7 track live recording of all the best stuff from the previous 4 albums. The two competed for sales to their core fanbase, a familiar rock’n’roll plot that never has a happy ending.
All that said, the band, in one form or another, went on to record a further 11 studio albums. Not too shabby. 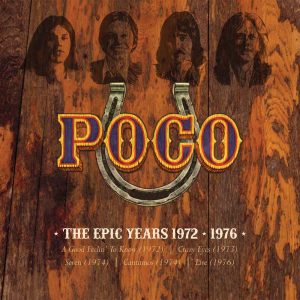