Doom worshippers must be struggling not to crack their face with a big cheesy grin because 2014 is proving a vintage year for followers of the morose, moody and menacing. If The Wounded Kings (whose Consolamentum is reviewed here) and Conan (whose Blood Eagle is reviewed here) have been the pallbearers of doom on these isles then across the Atlantic that role is being filled by Pilgrim. With Void Worship, the second full length release from the Rhode Island renegades, Pilgrim have again demonstrated that they are not the darkest or gloomiest kids on the block but their music has a depth and quality that reaches the parts that lesser releases don’t even come close to.

As the names would suggest, Pilgrim draw their strength from twisted tales of swords and sorcery enabling them to plunge the cataclysmic depths one minute before climbing to touch the stars the next. The slightly jaunty ‘Intro’ provides the riff that leads into the first track proper, ‘Master’s Chamber,’ a 10-minute procession that ambles along like some kind of lost soul trying to find his way home across the moors on a particularly misty night. A precarious journey but an enjoyable one all the same. The final stages are instrumental heaven with a riff creamier than a rice pudding – You just can’t get enough of it.

Having drawn you firmly into their crusty cavern, Pilgrim then close the door on you with ‘The Paladin’ which opens with a feisty throb that soon develops into an absolutely crunching riff with the power to slay a dragon. ’Arcane Sanctum’ sees Pilgrim dragging their heels in the manner of their debut album, lumbering along as slowly as a diseased deadbeat with a club foot. This is actually one of three tracks, if we include ‘Intro’ that expunge vocals altogether. Matter not. The dexterity and devilishness still prevails and the moody atmosphere is maintained, even intensified, during these atmospheric instrumentals.

Just in case you hadn’t already felt the sticky hand of Satan thumbing through Void Worship then you’ll certainly hear his cloven hoof kicking at the door during ‘In the Presence of Evil,’ a creeping monolithic behemoth of a song that has the capacity to crush you between its bloodied claws. The album’s title track opens with a lingering opening fuzz that gradually works its twisted way into a seismic beast with the hollow vocals of The Wizard cutting in against a plodding rhythm and intermittent pounding beat courtesy of Krolg. ‘Dwarven March’ is a two-minute dirge and the final number ‘Away From Here’ is another colossus,  a heavy stomper that just keeps pulling those strings ever tighter against a relentless backdrop of crashing cymbals and strained vocals.

Drawing from the likes of Pentagram, and maybe Cathedral, Pilgrim have created a majestic tablet for the twisted and the tormented. Elements of Void Worship at times may enter the realms of pure heavy metal, rousing themselves with fiery peaks and troughs, but make no mistake the melodies and there are many, don’t in any way reduce the dark ambient mood that stirs within its very core. The band’s 2012 debut release Misery Wizard was a formidably mind-numbing introduction to the darkness that surrounds these New Yorker’s but Void Worship is an even more accomplished offering to place before the gates of hell. Not one to let slip through your fingers. 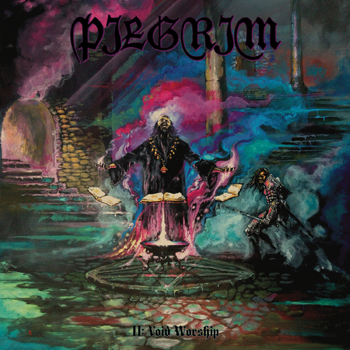