A Teutonic triumvirate of savage proportions pulled in a large and enthusiastic crowd to Scruffy Murphy’s in Birmingham. Fortunately, before Pighead and co took to the basement stage, a good number of the crowd were present for local openers, Spawned From Hate.

This was thoroughly merited, in particular as singer Dan was also wearing his AWB Promotions hat on the night. The local death metal outfit take few, if any, prisoners although Dan obligingly held off the opening number long enough for a more bodies to filter through the door.

Dan’s raw and rabid vocal style, if you’ve never encountered it before, is not entirely dissimilar from a distressed Rottweiler throwing up its breakfast. Although Spawned From Hate’s approach is akin to ramming a screwdriver into your forehead, they’re not lacking in musical ability, with plenty of interesting time changes and tempo adjustments in between the bombastic blastbeats.

Dan also has a nice turn of phrase. In dedicating the second song ‘The Sea’ to the band’s guitarist Pilko, on just becoming a father, he omits to tell us until the very end of his rambling monologue that the song is actually about murdering children!

On an evening when there were more references to lost limbs, blood and buckets of guts than an abattoir convention, Spawned From Hate played their part to the full when launching into the title track of their recent EP, ‘Accelerated Butchery’.

Songs like ‘Asphyxiate’ had the audience in a stranglehold and Spawned From Hate certainly acquitted themselves admirably before stepping aside to allow the first of the evening’s three German acts to take to the stage.

The trio performing under the banner of ‘Lower Hell Over Europe’ tour had four UK dates and fortunately Birmingham was among them. 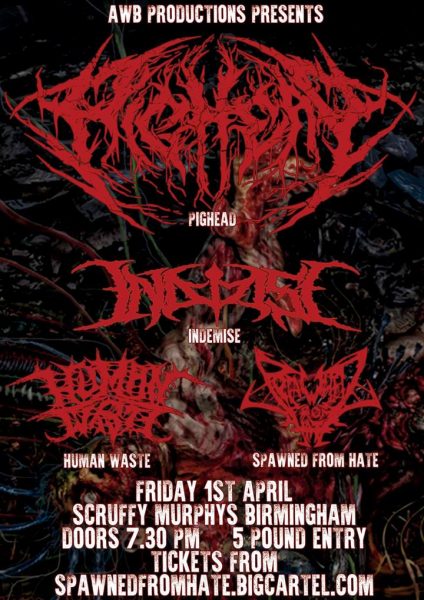 , from Aachen, kept the ferocity metre towards the top end with songs such as ‘Beheaded in the Pit’ from their debut album Rampage. They weren’t though afraid to occasionally lighten the mood, frontman Jan explaining that one song was written in tribute to cheap German beer!

In Demise were very much in the Dying Fetus mould, deep and aggressive, providing a crushing Germanic death metal assault that certainly left a favourable impression for the by now packed Scruffy’s crowd.

Before arriving in the UK, In Demise had been on the road across Europe performing with the likes of Oral Fistfuck and Intravenous Contamination under the ‘Maggots Across Europe’ tour.

Two members of Intravenous Contamination – Denny and Conor – are also in Pighead, with Denny also a member of In Demise. One big happy family!

By the time Pighead took over you sensed that Scruffys was set to blow and it only needed a single invitation from singer Phil to set the pit moving as the porkmeisters went for the jugular from the off with the pus-oozing ‘Dead Flesh Alive’ from their 2012 album, Rotten Body Reanimation.

When Pighead launch into one of their crater creating breakdowns it feels as though the walls are about to give way and the ceiling come down on our heads.

With Pighead the brutality never relents with a circle pit careering crazily through such cranium crushers as ‘Cadaver Desecrator’ and ‘Hatchet Slam Dismemberment’.

Animated frontman Phil flips between broken glass gargles and high-pitched squeals reminiscent of a lorry load of pigs being driven through the gates all too aware of what fate has in store for them.

There should be a new album from Pighead, this year, their third, and the title track Until All Flesh Decays did get an airing at Scruffy’s where their frighteningly vitriolic set closed with suitably savagery in ‘Kill The Living, Eat The Dead’ and ‘Resurrected Malignity’.