Slave to the grind…

So, let’s fill you in on the backstory. Petyr are an American four-piece fronted by Riley Hawk, pro-skateboarder and son of urm, pro-skateboarder Tony Hawk (yes, he of the video games). They play psychedelic stoner rock informed with a, yes, you guessed it, skateboarder philosophy. Their latest album, ‘Smolyk’, is partly a tribute to groundbreaking skateboard gangsta Peter Smolik, who catapulted to fame in the 90’s with his influential video, “Fulfill the Dream”.

The album starts with the ambitious four song suite, ‘Smolyk’. Part 1 introduces the wall of sound and big fuzzy guitars that lead into the scene setting mid section. The bass is filthy, guitars are stoned, scruffy and scuzzy and the pace is relentless. It’s trippy and loose, held together by a sloppy tightness clearly born of multiple jam sessions. The pace briefly drops into a series of controlled Sabbath riff explosions (riffsplosions?) and a howling solo. There is a short Eastern/Arabic feel and that ever present manic edge borders on the brink of chaos. That skater ethos of risk taking, of balancing on the edge of oblivion is ever present. Part 4 brings a gentler outro…oh, until a big fuck off riff kicks in. It has the essence of mkII Purple, that feeling of searching abandon. It all slows to a halt with a screech of feedback.

And so the album continues, these dudes don’t chill out for long. Acceleration always arrives, right on cue. Vocals are used as an extra instrument – slurred, cryptic and buried in the mix. Songs peel off on their own dangerous, erratic way. Guitars pile upon guitars. ‘Sunrise Double’ has a stoner NWOBHM vibe to the solo – Maiden on ‘shrooms!

‘Salt Lake’ teeters on the brink of crash ‘n burn, the perfect sound for an adrenaline junkie video. There is a constant sense of mania. Thinking of doing a charity sky dive? Or maybe even just throwing yourself out of a plane for no good reason? Need psyching up? Well just pop this through your earbuds.

Feedback and the crackle of overloaded amps heralds the 10 minute ‘Distant Shores’. It’s urgent, a tad crazed even. It’s been out in the desert too long, searching for universal truths, maybe even briefly joining an acid-fried hippy commune. It goes grungily batshit for a while before zoning out into Hawkwind style spacey territory. It gets louder, gibbering at you in tongues before an overwhelming psyche out riff fest returns. That ‘edge’ these dudes philosophise about? They’re getting pretty damn close to it here.

You’ve gotta love the energy, balls and ramshackle charm of this album. If you’ve ever wondered (unlikely, I know) what would happen if a bunch of fearless, slightly unhinged adrenaline freaks made an album, well wonder no more. This is it. Ever skated at full pelt toward a huge flight of concrete steps and done a grind down the central metal hand rail? No, nor me, but I imagine that this is the kind of sound that would be going through your mind. And that’s no bad thing. This “rips” dude. 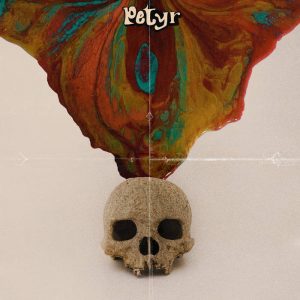