For those who don’t understand how iconic a stripe-suited giraffe wearing a Gibson Thunderbird round his neck was back in the 70’s, that’s because Thin Lizzy and The Clash’s bassists’ vanity earned them the right to front their band’s album’s covers. Pete Way just played it like he lived it, large, loud, lovable and unrepentant.

Having survived cancer, a heart attack, and countless years living a rock ‘n roll lifestyle to the max, the only man alive with a similar badge of (dis)honour was Ronnie Wood. Having supported The Faces during UFO’s early days it might have appeared Way was following in his footsteps; only with his own warts-and-all autobiography, A Fast Ride Out of Here: Confessions of Rock’s Most Dangerous Man, he went several steps further in the debauchery stakes.

Six times married, once to a doctor turned Playboy model, a week before he turned 70, he fell down the stairs, the resultant injuries eventually taking his life. Prior to the covid lockdown, he’d formed his own live band, with former UFO guitarist and drummer Laurence Archer and Clive Edwards respectively on board, Way, no longer able to play bass due to hand problems, was lead vocalist. Unlikely as that sounded.

Despite appending his name to bands like Fastway and Waysted, Pete Way began his solo career for real back in 2000, during downtime between UFO’s onstage fisticuffs and bust-ups.

Amphetamine was the album title, and if you couldn’t gauge the dark needle-scattered alleys the eights songs were going to take you down, well, you only had yourself to blame. The guiltless women in my life bought me a copy for either my birthday or as Christmas present. Now, there’s nothing to reveal this has been remastered, but it sounds a hell of a lot clearer than my original edition. Nor had I realised it had been recorded at Rockfield, thinking it was made over in Cleveland, USA.

Way wrote, sang and played bass on all the songs on Amphetamine. Drums came courtesy of Scott Phillips, with Walt James on guitar and backing vocals. Memory declares them to be similar to a Sunset Strip version of Blue Cheer one minute, Sid Vicious’ tougher brother jamming with Johnny Thunders the next. It’s both better and worse than that, mostly the former, but it’s not for everyone.

As a singer, Pete is a pub singer. There’s enthusiasm for his subject matter (mainly drugs) while several decades’ experience in bands ensures he actually was listening to the delivery pitched by Phil Mogg and others, so he knows where the emphasises ought to be. The reality is still highly subjective listening. Some might say that if they were demos his voice served a purpose (and songs were indeed later recorded by Damage Control) others that there’s an authenticity here, one that delivers the true spirit of unbridled rock ‘n roll. I think the latter’s a bit much, but in getting to try and understand the differences between larger-than-life character and caricature these records are worth evaluating on that level to some degree.

Striking a pose for true authenticity, Amphetamine both advocates the drugs lifestyle while admitting its countless unredeemable pitfalls. As the first tracks states ‘That’s Tuff’… James’ guitar bleeding out slow blues by way of Iommi, it shrugs into life with a hard rock slam as some mutated version of Eddie Cochran’s ‘Summertime Blues’, lyrically setting out the overall concept for the whole New York Dolls dogging West Side Story’s affair to come. ‘Hangin’ Out’ is The Dickies covering Motorhead, with such wonderful retorts as: “I’ll be down the Villa, I’ll be down the pub” no doubt bamboozling fans Stateside, while repeats lines: “What you think you’re doing, hanging out with me?” exclaim helpless frustration and a defeated honesty.

Early rocker Cochran’s influences can’t be understated on this record, because ‘Somethin’ Else’ may have formed the rough basis for parts of ‘Fooled Again’, and while it’s worth noting that UFO covered that number, this song as a whole could easily have been recorded by that band, mixing creative acoustic sections alongside the rockier barrage, lyrically trucking down the same seedy alleyways it also envelopes that Springsteen storytelling-melodrama Mogg deviate himself during this period.

‘American Kid (What A Shame)’ could be early Guns ‘N Roses unsure if they want to be Montrose or The Damned, though lines like “Another American kid getting high on drugs” are explicit in their detail. ‘Hole’ is a fuller acoustic version of ‘Hole 2’, that might very broadly be termed outlaw country in a Sex Pistols manner.

‘Crazy’ doesn’t fuck about. Picture a drunk with a smashed bottle in his hands stalking the street, spitting out venom at all and everything over staccato chords; but it’s not that simple, though you may go away singing the punchline “There ain’t no Alice here, this ain’t no Wonderland”, it’s the semi-sobering, confused and weary mutterings of “And I go crazy, go crazy again” uttered alongside acoustic interplay that offer the breadth of feelings a junkie must ensue. The song offers a demonstration of James’ ability as a guitarist, on both acoustic and electric, as does final main track ‘Hand To Hold’.

‘Hand To Hold’ is despair seeking – if not redemption – a brief relief from the exhaustive nature that life in the fast lane can bring. Musically it proves quite expansive, and lyrically a fitting closure to the somewhat sordid revelations related in what hindsight proves to be a concept album, by default. Back when this was first released, the internet was still in its childhood, not yet able to spill gossip so profusely, that Pete Way revealed these darker sides of his life himself on record I like to view as heroic in their honesty. That may not have been their intent, and you’re welcome to disagree, but there you go. This album may not be anywhere near as good as, say, your favourite UFO moments but they’re just as important in defining the man rock star Pete Way was.

Disc One in this collection is round off with three demos, pretty much the same, possibly a little more direct. Disc Two features the same power trio, playing live at The Revolution in Cleveland, Ohio in 2002. At times it sounds like they’re playing down the road rather than the computer speaker a foot in front of me. Way sounds like he’s had a few drinks before he’s wandered on stage, but there’s some decent interplay between the three of them, and while I become a bit worried about the pub singalong rendition of The Doors’ ‘Riders On The Storm’ during the middle of ‘That’s Tuff’ there’s some darkly inventive playing from James, who also add a healthy (is that the right terminology?) does of support in the vocal stakes through the gig, and the club’s audience sound receptive. ‘Fooled Again’ lacks it studio overdub intricacies, but some valid 60s styled semi-psych rock playing from James with Way proving he could still give it some on bass.

“This one’s about the bass player’s arse,” I recall Phil Mogg espousing between mic stand volleys at Birmingham’s Odeon back in the day, and ‘Too Hot To Handle’ proves a surprisingly good raucous rendition, Way delivering it full-on vocally, now you might not like those vocals but you can’t deny the conviction and their relevance to the man singing them on that night. Mind you, it does go on a bit.

The punk rocking ‘Might As Well Go Drinkin’’ and semi-anthemic slightly alt.rock ‘You & Me’ are live renditions of songs Way recorded with Michael Schenker, as The Plot. It’s during the later, I run from elsewhere in the house, to check I’m not mistaken but what I’m hearing, and it’s true, honestly, Way starts singing classic Temptations number, ‘Just My Imagination (Running Away With Me’. No tree UFO family tree completist would go to their grave without buying this album just to hear those few lines, so there’s a challenge!

More numbers first recorded by The Plot follow. Here, ‘I Need Her Bad’ could be Humble Pie doing a rendition of ‘Jumpin’ Jack Flash’, ‘Born Again’ is ‘That’s Tough’ with different lyrics and a more AOR musical hook (honest). ‘Somethin’ Else’ is given the energy it deserves, ‘Crazy’ may well have silenced a gobsmacked audience with its explicit lyrics, that and not expecting some reggae rhythms before corrosive spaced-out punky guitar solos ensue on this and ‘Hand To Hold’ that make you wonder how much the bass player missed the Larry Wallis days of UFO. His thanks as the set climaxes, genuine.

‘Paradise’ is listed as a bonus track, so presumably an addition to original edition. It’s credited to Way, and it’s just voice and acoustic guitar. Vocally, he comes across pretty well here, tender for the most part on a tune you wouldn’t be surprised to find on an Ian Hunter album, or 70s Steve Ellis-fronted band Widowmaker.

Real men dive straight on without trepidation to third and final album Acoustic Animal. Me, I needed a lie-down. Presumably ‘Paradise’ first appeared as the album leads off with it, and I can’t hear differences, only that the song had already grown on me.

Here we find that both Way and one Michael Christian are playing guitars. There’s nothing too elaborate going on but it’s confident enough for the songs delivered. Repeating a formula, some might say, we get Amphetamine numbers again. During these he often features a second, rather than harmony, vocal, and they work quite effectively. The lighter voice takes the lead, the more out-there tones emitted on Amphetamine used as angry reposits.

There’s a fair rendition of Waysted’s ‘Heaven Tonight’ and ‘Fooled Again’ once more proves its versatility, and deserving a proper good seeing-to by some band of decent stature, here its playing starts going off into areas prog rockers might take delight in developing (yet again, honestly), though I wish it had seen the light of day under UFO’s spotlight.

The likes of ‘Hole In My Heart and ‘Hand To Hold’ feature extended fretwork diversions, a cover of Fats Domino’s ‘If You Need Me’ presumably the man solo as he bashes out chords to the number, while ‘Hangin’ Out’ raises the eyebrows as it turns into an Everly Brothers number.

There’s a murky rendition of Lennon’s ‘Working Class Hero’ that finishes the record. Its angry, impassioned, maybe not all that good, though should someone be considering making a film of 1381’s English Peasant Revolt featuring Ray Winstone, I’d advise this version as totally fitting as part of the soundtrack. As it stands, in the context of what this collection is, it remains a fitting conclusion.

I’ve always appreciated the intentions behind the thematic writing of Amphetamine, it needs more serious reappraisal. Alice In Cleveland is raw, and of the in-yer-face live quality too many bands were pumping out to keep paying the bills a few years back, but also shows the band weren’t just dishing out the tunes, and there’s a bit of humour present too. Acoustic Animal could have been a trainwreck, and it truly wasn’t.

As I write these last lines, I’m trying to find a better perspective on my views to this collection. Winter approaches, am I beginning to feel maudlin, sad contemplating how Pete Way’s no longer here larger-than-life stomping round a stage? No, I know there’s that but as a collection this is a body of work deserving of being out there. The songs reflect important aspects of him as a creative individual, beyond a maligned cartoon lifestyle, and that’s what counts to those who will be prepared to listen. 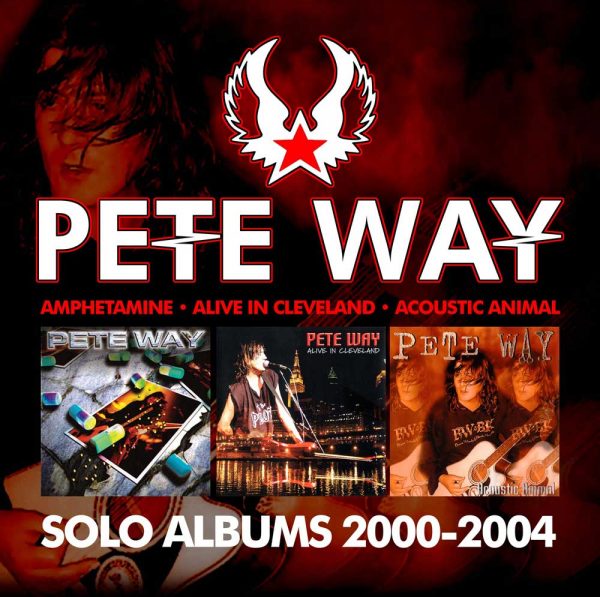