Handbags were thrown-out at dawn, punches dodged on stage, and musicians called it quits one more time; taking the collective consciousness of dysfunctional rock bands to an all-new sorry state as the internet (then in her scandal-mongering adolescence) reported swifty, with guitarist Michael Schenker exiting UFO for the last time. Bass player Pete Way’s large frame was apparently all that stood between the guitarist whacking singer Phil Mogg on stage (as Schenker had previously done to keyboard player/rhythm guitarist Paul Raymond in Japan).

Old wounds fester, revenge is safer served sober, and payback time can still bite you back. Maxims come in all shapes and sizes. Your father might’ve told you to “Man up!”, but that was before mental health issues became a media concern. Either way, the UFO Mothership regrouped, took a steady trajectory, shedding its load lightly over time until it now eases towards final descent.

Refused USA visas, Way had been diplomatically placed to one side around 2007. Ironic, in that previously he’d been living over there, and back in 2003 hooked up with Schenker yet again. Bringing on board drummer Jeff Martin, who’d been tour drummer on that fateful Sharks UFO tour, they began playing together as a three-piece. Confusion persists on whether this was intended as just a jam or something more. Tapes got out, allegedly, and so they decided to try and make some money themselves by having the tracks officially released. Choosing The Plot as group name, presumably with tongue-in-cheek, as in “lost the plot” and I’d always assumed it some meandering instrumental monster.

However, as this 3CD collection of Pete Way’s extra-curricular activities demonstrates, rough diamonds and curios occasionally turn up when you least expect them. The Plot in fact had songs, with Way taking lead vocals; though that choice won’t be to everyone’s tastes. The other two CD’s feature the band that was Damage Control. On paper it looked good with Way on bass, Robin George (who’d worked with a number of famous singers but was best known for AOR single ‘Heartline’) on guitar, Spike from The Quireboys on vocals, and Chris Slade, who’d played with everyone from Tom Jones to AC/DC on drums, but – as I recall – they released their album digitally, a novelty one didn’t expect to pay off back in a pre-Spotify dominating music world, and it sounded more like a one-off project; cue the third CD in this collection, variations on that same Damage Control album without Spike, with Way and George sharing vocals. Should any of this have been released? Let’s find out…

The Plot album begins with ‘You And Me’ a sturdy enough rocker wherein Schenker pulls out a solo admirably reminiscent in tone to his work on the Light’s Out album. Having recently heard Way’s live rendition of ‘I Need Her Bad’ I can confirm this version better with sharper classic rock tropes, and Way’s vocal phrasing much better, even if at one point I did think he was singing “I need a bed” (it’s my age). Lasting over six minutes, ‘Kicked Out’ throws somewhat predictable shapes musically, and implies Way’s imminent need to leave the USA. ‘Miss You Tonight’ is a Faces/Stones mishmash of an early 60s ballad, as if played down the pub but with some surprisingly pleasant backing vocals.

‘Born Again’ is a more AOR hooked version of the pounding rockers you’ll find on Way’s solo album, again the double-tracked or harmony group vocals add some gravitas to proceedings. ‘Take Another Shot’ proves to be a nifty Stones-styled rocker, Way full on vocally, Schenker chugging and weaving and bobbing on assorted guitars, and staying in the groove come the solo, albeit the sound is uniquely his own. The lazy slide opening for ‘Shake Down’ gives the impression we’re up for more of the same but comes on like Rocks-era Aerosmith, so another thumb’s up.

Invoking Latin American flavours over a downer blues is ‘Señorita’ during its first half, before springing nicely into life thereafter, with some inspired soloing from Schenker. ‘Just My Luck’ is vintage rock n’ roll played with mock-punk attitude, while ‘Wild Wild Things’ again hits all the right buttons, mixing pseudo-country and hard rock with a legs astride classic rock stance, all three musicians’ performances strong. Bopping to a Bo Diddley beat is ‘Ain’t Got You’. It’s okay but goes on for over four minutes, while final number ‘Might As Well Go Drinking’ lasting under two is Chuck Berry 12 bars with a rocket up its backside.

The album is a real mixed bag. Much better than expected in places. There might not be quite a handful here that could have been reworked into a more polished form, but there are surprisingly consistently good performances by all three musicians – and on something that wasn’t supposed to see the light of day but is seemingly worthy of enough attention to warrant it being re-released.

2007’s Damage Control album proves an even nicer surprise. Here we have Way reworking tracks from his solo Amphetamine album, sometimes with different lyrics but not always, plus material George had himself been gathering. The resultant record proves a positive meeting of the minds (although the subsequent album without Spike tends to contradict that, but more of which later), and the resultant music comes across as a mixture of Free and The Faces given a hard rock makeover. Yeah, that good.

Between blistering angry blues guitar notes, Spike screams how he’s been up all night, and all’s not well. Enter the kind of power chords first heard on Free’s Fire & Water album intermixed with guitar riff squabbling of the kind the Stones made their majestic own back-in-the-day and ‘Dead Man Walking’ proves a rocking good start. Next up is ‘Savage Songs’ where this time its acoustic blues melodies alongside Spike’s voice before it powers up and trundles off at a fine face, fans of UFO’s rendition of ‘Mystery Train’ will not be displeased here.

‘Alice’ turns out to be Way’s ‘Crazy’ rewritten. George adds melodies and a production sheen to it, while Spike’s vocals add spirit and tonal nuance, the overall effect being alt-rock with some classic rock-inspired grunge on the side. ‘Selfish’ is a slow sardonic blues in a hard rock Faces style while ‘C’mon Down’ see the return of Free power chords and Stones swagger in a number reminiscent of both The Quireboys and Black Crowes…oh, and Slade is playing a cowbell. ‘Damage Control’ itself is in the same groove but on a grander scale with some Humble Pie grit and soul thrown in for good measure, despite it being another reworked Way solo number at its core, but it just reminds you never to thrown anything away. ‘Victim’ is Way’s ‘Hole’ reworked as dirty country rocker. ‘Raw’ is a stomping rock and roll, not a million miles removed from Stretch’s ‘That’s the Way The Wind Blows’ but harder, nastier, and dangerously more addictive, while George interlays fuzzed guitar lines in the style of San Francisco psychedelic rock bands between his hard rock.

‘One Step Closer’ is another mean and moody blues number, the arpeggio intro for ‘Redundant’ uplifting despite the title and lyrics, shifting and kicking in country rock style with some inspired lead work from George throughout. ‘Seven Golden Daffodils’ is reminiscent of Mr Big at their most Humble Pie blues stylised, and final number ‘Bitching Blues’ ends as the album began with George’s guitar wailing away, this time on slide, before shuffling into a hardy boogie that moves and shakes in the right places to see us out nicely.

This is a good album, really good in some places. If I could have got it on CD back when it came out first time round, instead of that tricky-dicky digital stuff, then I would have; so, it’s great to actually hear it now, and in a better world would have been nice to hear the band developing on future releases. Which makes 2009’s Raw all the more curious. Here the power trio dispensed with Spike’s vocals, the stated comments being they always wanted to do a rougher version and featuring their own vocals. Way’s given a better production on his voice, while George’s voice is much deeper than in his youth, the result being who’s singing which number not always as easy as one might assume.

Opening with ‘Raw’, I’m presuming it’s George singing but what’s more notable is the near goth rock stance the music takes, and since Way’s ‘Alice’, in its various interpretations always veered in that territory, here it becomes like a cover the Mission might’ve made. ‘Savage Song’ is brighter, more in the moment, and you can picture Bon Jovi in their prime covering it. Hmm, with this rendition of ‘Damage Control’ I realise our Pete’s reworked Waysted’s ‘Lost in Cleveland’ with the odd Amphetamine album hook line, his Johnny Thunders’ vocal delivery sweetened by, presumably, George joining in during the choruses.

‘One Step Closer’ is less downbeat-blues more-scuzzy LA sleaze tumbling kickabout. ‘Selfish’ is actually more melodic and comes across like some lost Cockney Rebel single. Amid some ace live-sounding drums, ‘Pray For You And Me’ features those Free power chords again, struts like it belongs in an arena, while Way sings like he’s out of the gutter and ready for some action. ‘Spy’ is a spoof, right? It mixes 60’s beat ballad, ska and power pop yet is also a ringer for a hit single from long ago that I’m bound to wake up in the middle of the night singing to myself.

‘Redundant’ is a bit clean and dry, like a demo run through, mixing acoustic and electric as blues rocker ‘Slaughtered’ is of a similar scope. Way’s ‘Hole Part 1’ reworked as ‘Victim’ in this rendition is a little too neat and tidy. ‘Seven Golden Daffodils’ again feels like some lost 70’s single, but while retaining its blues beat, it’s more like a Mud b-side. Fortunately, ‘Bitching Blues’ beefs things up as the band waves its goodbyes, with George and Way each taking lines, then singing along together, with loud washes of slide over a pumping rhythm section.

The main Damage Control album is definitely the keeper here, and is going to get some serious replaying, Raw is mainly for completists, and The Plot shows that when presumably out-of-their-minds there are some musicians who can pull rabbits out of the hat when least expected. Value for money as a collection. 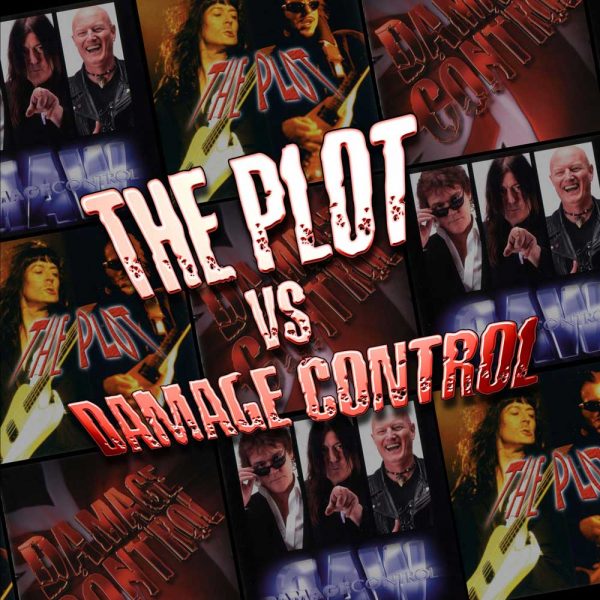