Lurking in Australia’s underground since 2003, Pestilential Shadows have always been as black as the best of them. Interspersing their scorched and bleak landscapes with atmospheric passages, their raw and tortured sound has carried a depth and density that, while emblematic of the genre, has always remained their own. With their last full length, 2011’s Depths, the band’s melancholic complexities and melodic sensibilities continued to become increasingly powerful and the experience of that album was a punishing one, rewardingly so. Three years later and Pestilential Shadows are back with their fifth full length, Ephemeral. And like its predecessors, it is darkly meditative and majestic, maintaining a powerfully mesmeric hold over the listener from start to finish.

Bookended by two ominously atmospheric pieces – the first ninety seconds, the second just over two minutes – the five tracks between them make for an epic journey through misery, mystery, and malice. There’s a curiously cold warmth to each of the tracks, one that is calm, serene, and tranquil while remaining dynamic, potent, and unwavering in fire-fuelled determination. While brimming in ire, the moods and tempos shifting between the sluggish desolation of doom and the hypnotic devastation of black metal, the melodies that emerge from the penumbra are dramatic and enchanting. There may be the odd occasion where the album wavers (‘Hymn Of Isolation & Suicide’ in particular), but between seven and ten minutes long, each track is testament to the compositional skill of the band.

Unsettling and all-consuming, Pestilential Shadows may not be doing anything that we haven’t already heard from the horde of atmospheric and depressive black metal bands before but they do it well. Very well. Rather than being a collection of high quality black metal tracks, the album is a whole, a unified work that demands and deserves to be taken as such. Simultaneously despondent and defiant, Ephemeral is a thoroughly absorbing piece of work. Highly recommended. 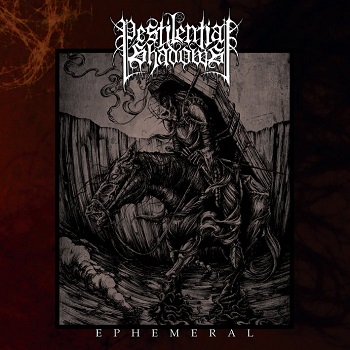