Can non-guitar based music be heavy? Discuss. And if so, how heavy can it really be. None, is the answer, none more heavy and as exhibit A I present Perturbator, aka James Kent. New Model is album number seven from this retrosynth/darksynth mainstay and arguably his best.

Retrosynth? It’s a genre of electronic music whose sound and imagery is strongly influenced by 80’s arcade games, horror and sci-fi movies. The soundtrack to Stranger Things – classic retrosynth. And Perturbator was and is one if its prime movers.

But this. This is an evolutionary step forward. Kent, a former black metal guitarist (and son of legendary NME rock writer, Nick Kent) has said that this mini album was conceived and written at a dark time in his life – and boy does it show. Some of rock’s finest albums have been created by artists in a time of personal turmoil and this may well rank up there with the best of them.

It begins almost gently. Electronic plinks and a calming wash of synths, but it’s in the key of sinister. It’s very John Carpenteresque, more and more sounds are layered on – processed and unprocessed, digital and analogue. It ebbs and flows and morphs into a sound of electronic orchestra proportions. His time as a metal guitarist certainly informs this – its power, dynamics and brutality. We storm into a barrage of electronic blast beats which fade into the digital army on the march military industrial thuggery of ‘Tactical Precision Disarray’. His synthwave trademarks are still present and correct but presented in a much darker hue. A frankly overwhelming sound is conjured up. Sorry rock purists, but THIS is heavy! There are post rock dynamics and beautiful blending of light and shade but this pounds and bludgeons you into a gibbering, boggle eyed pulp.

‘Vantablack’ adds vocals to the mix, giving it a latter day NIN feel. Lovely warm analogue synths blend with the digital, it’s sumptuously decadent and sensual…until it takes a turn for the disturbing. The lyrics become sinister, violent, threatening. Shocking and very powerful, this isn’t looking to be loved. You’re left shaken and moved while its metal riffs played on synths roar to their conclusion.

And it just keeps ramping it up. The tempo’s of ‘Tainted Empire’ switch brutally, it’s huge, filthy, mechanised beats pinning you down. This fucker flies – it takes off, wheels spinning in the dust. It’s a deluge of adrenalized, distorted, juddering uber riffs.

The sleazy 80’s Gary Numan stylings of ‘Corrupted By Design’ give us the most (well, only) dance oriented track so far. It’s powerful but roomy, there’s space to breathe, it’s woozy drones and bleeps offer a fleeting moment of relative calm. And man, do we need it. The following 10 minutes of ‘God Complex’ offer no quarter. At all. Its initial immense electronic explosions, clanks, booms and hisses lead into a foul, radiation scarred monster of a riff. If I hear anything heavier this year I’ll be stunned…literally. It’s distortion in excelsis, almost white noise at times. Epic, intense, it’s a mammoth, unforgiving wall of pure sound, jackbooting it’s way through multiple movements. A moment of ambient beauty does nothing to lull you into a false sense of security – you just know that the bad things lurking will return in force. And they do, in a shit storm of BPM’s and fury. Black metal attitude ahoy! If this had all been played on guitars many of you would be hailing this as an album of the year.

This is the sound of an artist transcending his genre. Creating his own music for no-one but himself. Demons are clearly being exorcised. It’s music that doesn’t give a fuck about pleasing or appeasing, it simply exists on it’s own terms. Kent has created music more thrilling and affecting than the majority of music that inspired him in the first place, he’s moved forwards and onwards and surely that should always be the goal. Guitars or not, heavy is heavy. Give this a try. 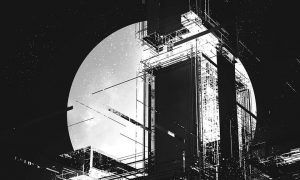