Yeah, yeah, I know it’s still November but Ho, Ho and, to cut a long story short, Ho. Mr. Big six-stringer Paul Gilbert has only gone and released an instrumental Christmas album. Recorded live in the studio with a hand-picked group of Portland based jazz and blues muso’s, Gilbert has shredded his way through a collection of festive faves (and two new compositions) on a selection of red, white and green Ibanez guitars.

Now, instrumental albums aren’t everyone’s cup of tea. And nor for that matter are Christmas albums and this, this album is resolutely both. So, you’ve probably already made up your mind as to whether or not you’re going to continue reading this. If you have, welcome aboard. Let’s waste no more time – after a brief, intricate piece of guitar noodling we’re off into ‘Let It Snow! Let It Snow’. Initially the song resembles nothing more than a jazzy jam, bearing little resemblance to the Christmas staple but then, suddenly, the bass picks up the melody, Gilbert joins in and we’re on our snowy way. Obviously, this being who it is, there’s a lot of technique on display, but it’s still enjoyable. Jazz is the predominant style but it fuzzes out nicely towards the end.

And on we go. ‘frosty The Snowman’ is given a slow,bluesy makeover. Eventually the tempo kicks up  a gear until we eventually kick into a raw, 12 bar shuffle. This seems to be the template for the album – jazz, blues and a fair bit of exploration. Songs are explored, turned inside out, riffed upon until the melody eventually, finally reappears. And for the majority of the time it kinda works.

Jazz wins out overall, although jazz played on an overdriven Ibanez.  ‘The Christmas Song’ is mellow and cool while ‘Every Christmas Has Love’ (one of the original compositions) even heads into Smooth Jazz territory. Blues does, however, get a good look in too. Gilbert’s squalling slide guitar rears it’s head throughout the album while ‘I Saw Three Ships’ briefly morphs into a raw take on Willie Dixon’s classic ‘Bad To The Bone’ riff.

So yes, a shred-tastic Christmas album. There’s not much else to add. You’ll pretty much know what to expect and you won’t be far wrong. If you’re a guitar head, it’s worth a listen and it may well be worth popping on at a party to slightly increase your festive gathering’s rock quotient. Have yourself a shreddy little Christmas.

Released by The Players Club on 16 November 2021 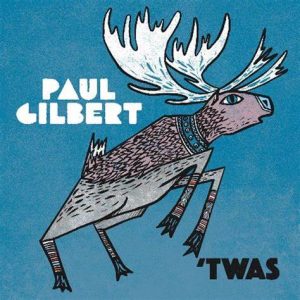