Or is it portentous? Is it simply ironic, arch, delivered with a wink and a knowing grin? There are several things which separate Gilbert from the rest of the G4, posing in front of the mirror, guitar wizard fraternity, namely a subtle sense of humour and, due to his tenure in Mr.Big, the ability to write, y’know, actual songs…not just extended solo’s.

Lead track ‘Havin’ It’ (and no, its not an Oasis stylee Mancunian call-to-arms), kind of sets the general tone. Kind of…for this is an album of variety (well, as much as an instrumental guitar album can be). The first 30 seconds alone see Mr.G spin off into at least 4 different styles. The playing is uniformly wonderful – playful and expressive – every trick, lick and technique know to mankind is effortlessly showcased.

The overall vibe is one of electric jazz fusion and this proliferates throughout. A loose framework put in place to let Gilbert and his band explore and fly. Sometimes (to misquote The Matrix) there is no framework, it’s deffo closer to amplified jazz (step forward Mssrs Holdsworth, McLaughlin, Pastorius) than conventional rock. This band can officially call themselves cats.

And on it goes in the same vein, ‘Everywhere That Mary Went’ features groovy Hammond B3 and subtle, fuzzed references to, you guessed it, ‘Mary Had A Little Lamb’.

So, let’s get back to that variety we mentioned earlier. There are straightforward riff-solo-riff things, chock full of complex riffery, though no less stunning for that. And there is quite a lot of blues, for which Gilbert’s new invention comes into play…all hail the ‘slide magnet’ – namely a magnet holding his slide onto the side of his guitar which allows him to “grab it and put it back at lightning speed”.

Several songs sound as though they had been written with lyrics in mind, which Gilbert has chosen to deliver via his guitar. It is in these moments that his playing is at it’s most expressive and expansive. There is a lyricism to Gilbert’s playing here, while still managing to avoid feeling like showboating…no small feat when Mr.G is playing this well.

Suffice to say Paul Gilbert does the whole instrumental rock album thing as it should be done. The playing is mind-bendingly good. The six string histrionics give you motion sickness…but in a good way. That feeling when you were in the back of your parents car and it went over a hill, your stomach lurched and tickled gloriously…that. It also has songs. Actual songs you can listen to and enjoy even if you’ve never picked up a guitar in your life And that, dear reader, is the crucial difference. Recommended. 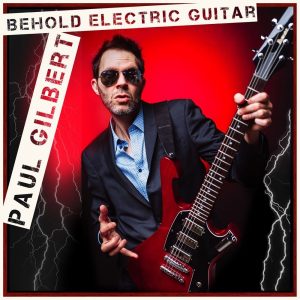