Paul Castles revisits one of Paradise Lost’s best-loved albums, One Second, reissued 20 years later by Music For Nations on 14 July 2017

Paradise Lost’s legions of fans are no doubt as familiar with much of this celebratory anniversary double CD release as the hairs on the back of their own hands. That though is unlikely to deter the followers of one of the UK’s finest and most creative bands of any genre from seeking to secure their own piece of musical history.

And while One Second is essentially a repackaged re-release two decades on from its first exposure to the world, there’s more than enough here to quench the thirst of even the most ardent of Paradise Lost fans. This new offering sails through the two-hour mark, in part thanks to the inclusion of a live recording from the Shepherds Bush Empire in 1998 – previously only available as a DVD.

One Second, the band’s sixth studio album release, marked a shift in musical direction for Halifax’s finest as the use of synths saw them move towards a more goth sound, and certainly navigated some different instrumental waters compared to their previous release Draconian Times (1995).

The Yorkshiremen’s ability to fuse chunky riffs with haunting melodic soundscapes has made them a natural draw for anyone who likes their metal injected with a layer of goth doom. At times they’re very reminiscent of Sisters of Mercy, another esteemed Yorkshire outfit, although one lacking the longevity of Paradise Lost. And PL were also less depressive in tone and atmosphere than the generally sulky Sisters.

But to discuss the merits of which envelope – goth or metal – to stick their stamp on is to almost miss the point with Paradise Lost. They are simply an extraordinary band, and as such this expansive and opulent offering, with all the riches of a sumptuous banquet of sounds, is as good a starting point as any for those seeking an in to the world of Paradise Lost.

Nick Holmes is a wonderfully warm vocalist who brings genuine depth, passion and emotion to these songs from the uplifting ‘Say Just Words’ and ‘Mercy’ through to the murkier haunting gloom of ‘Lydia’. Holmes jettisoned his death metal aural assignments with Bloodbath a couple of years back to pour every ounce of his being into Paradise Lost. Interestingly for a band on the cusp of entering their third decade, the line-up – with the exception of the drum stool – has remained consistent with Holmes fronting guitarists Greg Mackintosh and Aaron Aedy with Steve Edmondson on bass.

Holmes’ clean vocals complement the monstrous hooks and while the sound has a natural warm glow that will always reach beyond the confines of a purely metal crowd, on One Second Paradise Lost pushed all such fears to one side. ‘Another Day’ has an immense grandeur about it that would have a stadium-sized crowd swaying its approval while ‘This Cold Life’ has an infectious charge running through it that bewitches you with its flowing kaleidoscopic grooves.

‘Blood of Another’ is certainly pumped with more testosterone and the rhythms take on a darker hue and Holmes drops his voice an octave or two while the atmospheric angst of ‘Disappear’ is not the only track to invite Depeche Mode comparisons.

The second disc features the Shepherds Bush performance and most of the One Second material resurfaces here, along with some earlier Paradise Lost favourites such as ‘Shadowkings’, ‘Embers Fire’ and ‘The Last Time’.

The whole package is superbly presented, including a 20-page booklet, and while a homage to the band’s past Paradise Lost are unlikely to dwell on former glories with a 15th studio album, Medusa, set to be released via Nuclear Blast on 1 September. Next year expect further Paradise Lost celebrations as the Yorkshire veterans notch up their 30th year. 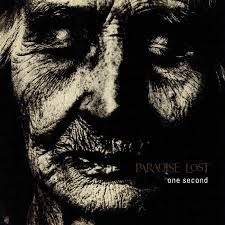