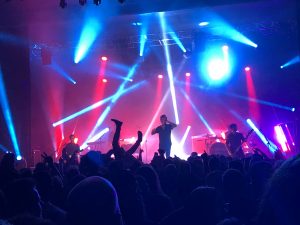 After an almost a month touring all over the UK, and when we say all over we literally mean from the Highlands to practically lands end, Papa Roach’s UK run came to its close in the hallowed lands of the hometown of Heavy Metal.

You’d be forgiven in thinking a Monday night was an odd day to finish the tour on, but fans were out in droves for the last night of the tour and, the band certainly gave the fans (and O2 Academy security) a night they’ll never forget.

Since their debut at Download Festival, all the way back in 2014 (on the Red Bull Studios Stage no less) Nothing More has come a long way. Pundits that witnessed their 2014 performance were full of praise and reckoned they’d quickly be climbing the ranks – and they weren’t far wrong. With stints performing in arenas alongside the likes of Bullet For My Valentine and Five Finger Death Punch plus Grammy nominations, the Texas quartet has been carving an impressive name for themselves. Tonight however they’re in unfamiliar waters playing Birmingham for the very first time in their career.

Frontman Johnny Hawkins is known for his wild on-stage antics – case in point as their set opens with him dangling off the mast of an onstage ship. Quite the entrance as ‘Let ‘em Burn’ and ‘Christ Copyright’ kicks the already full Academy into life.

Affairs slow down briefly for the intro of ‘Jenny’ – a song dedicated to Hawkins sister covering the struggles of mental health issues. Its powerful and lyrically resonates with many of the audience in attendance before ‘This Is The Time (Ballast)’ rolls around. Here we see the heavier side of Nothing More showcasing the technical skills of all band members and especially Hawkins’ impressive vocal range.

Unfortunately for Nothing More tonight their usual in your face impact is somewhat dampened by a disappointing, muddy sound mix leading to somewhat underwhelming set. Undeterred the band soldiers on, ending in their trademark madness with Johnny throwing shapes atop of his Scorpion contraption – a bizarre 15ft metal structure made of auto parts and digital musical effects – as the crowd sang along to Queen’s ‘We Will Rock You’. They’ll do better performances but tonight was surely enough to score them a few new fans who will undoubtedly be gracing the frontlines and singing every line when they return to the city.

But tonight was all about the headliners. Papa Roach is a band that’s navigated their nu-metal origins and the muddy waters in-between and somehow managed to stay afloat keeping their core sound whilst also reinventing themselves organically on Indie label Eleven Seven Music. 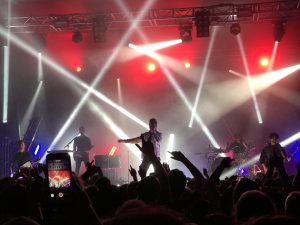 Sometimes less is more and all a band needs is a simple no-nonsense stage show and some good lighting and the jobs a good ‘un. This, in a nutshell, is how Papa Roach took on Birmingham. No pyro. No time-wasting banter between songs. Just two hours loaded with buckets of energy and damn good tunes from start to end.

Playing your biggest and most well-known song first is certainly a bold move but a risk that paid off very well for the Vacaville Rockers. In unorthodox fashion, ‘Last Resort’ opens the set, laying all the Papa Roach cards on the table and Birmingham was thirsty for more. The sing-alongs are simply electrifying.

When a music video clip is announced for’ Renegade Music’ the scenes that ensued were rock music magic. Rules are made to broken (or so they say) and frontman Jacoby Shaddix isn’t too fond of the Academy’s ‘sit down’ if you have balcony tickets rules. In fact, multiple times during the show, he encourages the crowd to stand up because “last time you were here you weren’t seated”. Hesitant at first until Shaddix assures that beyond reasonable doubt they won’t be kicked out of the gig, the entire balcony rises. Just a damn sight better than Good Charlotte’s balcony Mexican Wave a few years back. Although we did feel a tiny bit sorry for the handful of security guards trying to keep the balcony under control during the show and back in their seats… just a teeny bit.

New School material from 2019’s ‘Who Do You Trust?’ and 2017’s ‘Crooked Teeth’ dominated the setlist slotting in amongst classic Papa Roach material comfortably. ‘Help’, ‘None of the Above, ‘Elevate’, ‘Not The Only One’ and the groove lick infused ‘Who Do You Trust’ were amongst the highlights. 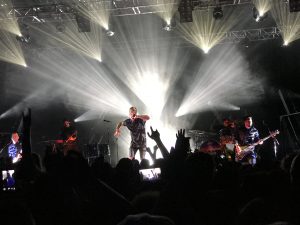 But make no mistake, the timeless heavy hitters in Papa Roach’s catalogue brought the thunder in abundance and sounded absolutely flawless from ‘Getting Away With Murder’ and ‘Between Angels & Insects’ to the much-loved  ‘Scars’. And of course the ultimate Hard Rock anthem ‘…To Be Loved’ with a bit of Ramones Ay Oh Lets Go gets thrown in amongst the encore for extra good measure. Birmingham is on fire tonight.

Some bands can barely emulate the Slipknot crowd participation Jump the F*ck Up section, and even fewer dare to attempt it twice in one show (take note OM&M!). Enter Shaddix. He doesn’t even need to call for the audience to get down, they’re already there as affairs wrap up for a killer rendition of The Prodigy’s ‘Firestarter’, an unlikely cover that the band absolutely nails as a nod to Keith Flint (RIP).

They close with ‘Born For Greatness’. Last time they were here they shot clips of Birmingham for the music video which went disastrously wrong as the crowd surfing Shaddix barely made it past the first three rows and smashed a Go Pro (huge crowd fail) but Birmingham redeems itself tonight as the mosh pits light up and the crowd goes for one last bounce on the academy dance floor. It ends and the entire crowd is on their feet furiously yelling Papa Roach, Papa Roach until the band exits the stage.

A lot of bands select London as their tour finale but dare we say it Papa Roach in Birmingham steamrollered the rest. A rocking end to what was surely their best UK run yet.

Last Resort
Help
Who Do You Trust?
Getting Away With Murder
Renegade Music
Between Angels and Insects
Elevate
Not the Only One
Traumatic
Falling Apart
Forever
None of the Above
Scars
Feel Like Home
…To Be Loved