Who better to close out the final night of Download 2018 than the Prince of Darkness himself on what is being billed as his final ever World Tour. With 100,000 fans having descended on Donington over the three days of the festival Ozzy Osbourne provided the perfect soundtrack to send everyone home happy with a 90 minute romp through the very best moments of his solo career along with a handful of Black Sabbath classics. 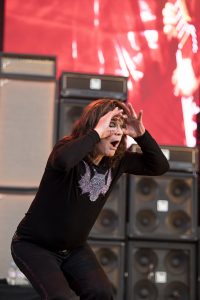 After an opening montage which showed visual highlights beginning with childhood photos and took in the Sabbath years, Blizzard of Oz and the 21st Century, Ozzy greeted the crowd with his manic stare and usual cry of ” I can’t hear you” before the band launched into ‘Bark at the Moon’. Any doubts about his voice were soon laid to rest with an explosive ‘Mr. Crowley’ and, in truth, he sounded better as the show wore on and showed no signs of wear and tear. With Zakk Wylde now back in tow there was plenty of shredding and wild soloing to be enjoyed and the guitarist went for a long walkabout through the crowd as the climax of ‘War Pigs’ was stretched out before he and the rest of the band (Tommy Clufetos, Adam Wakeman and Rob Nicholson) ran through an instrumental medley of deeper cuts. 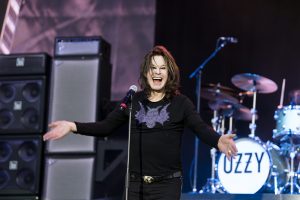 With Ozzy returning to the stage it was time for the battle cry of ‘I Don’t Want to Change the World’ and the momentum continued with a raucous ‘Shot in the Dark’ before the moment came for Donington to board the ‘Crazy Train’ one last time. If this proves to be Ozzy’s final performance at the site then it was the perfect farewell.