Naming the band after a Black Sabbath track is blatantly a case of Orchid wearing their heart firmly on their sleeve. At only four tracks long, it’s perhaps somewhat ambitious of the band to refer to this as a ‘mini album’ rather than an EP, but to be brutally honest, my only complaint is that it isn’t longer than the paltry 19 minutes the four tracks provide.

Theo Mindell’s vocals take centre stage in something that feels like a sampler for an early Black Sabbath album (and while they share the soulful character of Ozzy’s warblings, they’re far more evocative). Mark Thomas Baker’s guitar work feels like he’s invoked the spirit of Tony Iommi in some dark ritual, and the drum and bass combination of Carter Kennedy and Keith Nickel provides a superbly atmospheric underpinning to hold it all together.

It’s a gloriously heavy sound that creates a thumping, heavy, bluesy, psychedelic hard rock that wouldn’t have been out of place in the 70s at all – and it easily holds its own against those that came before, too. On this EP, there’s still something that feels raw and vital in a genre that was born more than three decades ago, and Orchid have managed not only to evoke the spirit of that age, but to make it seem fresh and relevant all over again.

The opening track ‘Helicopters’ switches between a slow, transcendental groove and wailing guitar riffs and back again with style to spare, and with prominent bassline solo thrown in for good measure at the end. ‘John the Tiger’ sounds like it was born from the band riffing on the outro from ‘Fairies Wear Boots’ and turning it into something new and vital again. By the time eponymous ‘Sign of the Witch’ begins, I’m already hooked – and the big, chunky choruses just drill into your head and refuse to vacate. The relatively slow psychedelia of ‘Strange Winds’ slows everything down again and feels like the calm before the storm. And then it ends. 19 minutes gone in the blink of an eye, and I’m left wanting more. The only option is to put it back on again. And again. And again… 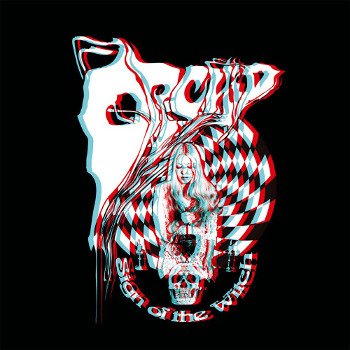