Here we are…a biggie. Album no. 13 from Swedish prog metal overlords, Opeth. Opeth albums seem to take us back in time to an era when new releases by bands were pored over and dissected with a fine-tooth comb. Listened to multiple times in laboratory conditions (well, a silent bedroom with no TV on) – the lyrics, the art work…what did it all mean, man? And is that King Diamond in one of the windows on the cover?

Also, in the grand rock tradition, the story of Opeth is the story of one man’s musical vision…namely, Mikael Åkerfeldt. His (and the band’s) journey has taken us from Black Metal to complex Progressive Metal and finally, since 2011’s ‘Heritage’ – folk tinged Progressive Rock.

So, what to expect from ‘In Cauda Venenum’. Well, if the Latin title is anything to go by, more bombastic prog (it means ‘Poison In The Tale’, btw). Further pre-release dispatches from the band inform us that the album will be released in two versions – English and Swedish. And, according to Åkerfeldt, the Swedish version is the official version…so that’s the version we will be discussing here. Foreign language albums don’t do Rammstein any harm and no, maybe you don’t know what exactly is being said but you get what’s going on and, surely, that’s the sign of a good songwriter. Plus, it gives the album a sense of, y’know, mystery and shit.

We begin with an atmospheric scene setter. Monastic chants, Tangerine Dream style synths, bells and whistles (literally), street sounds and vocal samples, a la ‘Dark Side Of The Moon’ (these become a constant throughout the album, bookending songs).

And then we’re off into a lengthy lesson in Prog. It’s all here, Canterbury style folk prog (lots of this), killer rock riffs, lots of keyboards, lots of muted vocal samples and oodles of twisting, turning, mind melting riffery – time signatures abound and riffs spin off in all directions like fireworks from a Catherine Wheel.

Åkerfeldt has spoken at length about how he didn’t want to make a “basic heavy metal” album, and he certainly hasn’t here. He’s pretty much nailed the “different kind of heaviness” that he’s been hearing in his head. There is a great deal of acoustic guitar – Nick Drake and Bert Jansch seem to be touchstones. But riffs are never too far away – there are soaring, wailing solos, Hammer horror psych riffs and atonal belches. There is the occasional howling rock out, but they are few and far between, making them all the more effective and powerful (and gratefully received) when they arrive.

There are also other things. Jazz certainly plays it’s part. ‘Banamannen’, from a flamenco intro moves into ECM style mellow piano jazz, with added muted saxophone…or is it trumpet? Or is it, in fact, treated vocals singing horn lines? who knows. Oh yeah, there are also strings.

Strings. Lots of strings, throughout the album (something Åkerfeldt has long wanted to do), lending a gently epic, orchestral feel. They’re everywhere, often drowning out or replacing guitars. And ballads, quite a few of those too. ‘Minnets Yta’ almost sounds like vintage Queen, or a metal Elton John. It’s traditional structure building to a lighters at the ready climax. The religious chanting seems to give way to more samples of children singing and playing. Is this a theme? Innocence or the loss of it? The English language version will definitely require a spin.

We finish with ‘Allting Tar Slut’ (which translates to ‘All Things Will Pass’…I don’t know about you, but Tar Sluts sound much more interesting). The first full-blooded riff for a long while appears. It feels more consistent and cohesive than much of what has preceded it and, although it drops out into a drum and piano moment, it finishes with a big prog finish.

So…interesting. Definitely not their heaviest (or best) by any stretch of the imagination (certain tracks on ‘Sorceress’ were specifically written for band members who wanted heavier material to get their teeth into – this didn’t happen for this album) but certainly interesting. It’s an album that meanders, that does whatever it wants to do and does it in it’s own good time. Fans of ‘Hereditary’ will love it. There are guitars, yes, but there is little in the way of your actual traditional rock. Non Prog fans may struggle with this one but, for the rest of us, there are plenty of cerebral pleasures on this particular bucolic stroll on the dark side. 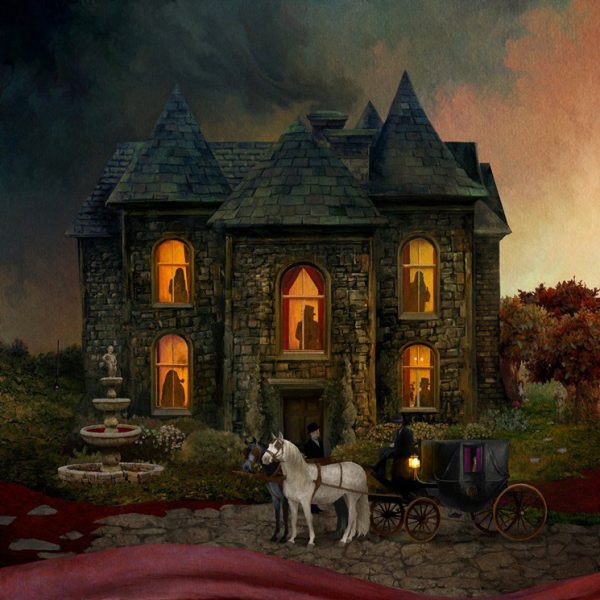