Enslaved and Opeth on the same bill. A dream line-up. Tonight, Birmingham is spoilt. 7.40 and Enslaved enter the stage to a very warm welcome from the crowd and ‘Storm Son’ from the incredible E, released a little a month ago, to begin proceedings. Where for most a 5-song set would mean somewhere between 15 and 20 minutes on stage, not so for Enslaved. Drawing from their last 3 albums, RIITIIR, In Times and the aforementioned E, it’s a very good 50 minutes before Enslaved deem their exit necessary. Played and received like this is the headline band, the crowd are all over this with horns, hails and banging heads filling the air. Simultaneously complex and hypnotic, Enslaved’s embracing of their progressive influences continues to serve them well, both on record and on stage where they hold listener and crowd in the palms of their hands throughout. Like their songs, tonight’s show was epic.

The lights dim and Popol Vuh’s ‘Through Pain To Heaven’ emanates from the speakers. With this opening statement, the band that continues to be berated by those that wish the band would deliver another Deliverance make it patently clear that that’s not going to happen. Eschewing death metal altogether on 2011’s Heritage and further exploring their progressive side with 2014’s Pale Communion and 2016’s Sorceress, Opeth are all the better for it. As much as I enjoy their earlier works, Opeth’s adventures in experimentation and musical fusion has much to offer. So much so that this evening’s set celebrates the band’s diversity, taking in one track from every album since 1998’s My Arms, Your Hearse and 2 tracks from last year’s Sorceress.

As expected, the band is tight, drummer Axenrot and bassist Méndez stage right holding down the low end with their usual aplomb and stage left guitarist Åkesson and keyboardist Svalberg bringing many a shape and shade to the music. Centre stage is Åkerfeldt, his guitar work second to none and his smooth shifts between melodic vocals and death metal growls carries as much weight as ever. And complementing this flawless delivery of Åkerfeldt’s epic (there’s that word again) and elaborate compositions is an impressive light show and animated back projections, woods, lakes and mountains blended with the nightmarish imagery from the ‘Sorceress’ video and unsettling footage of an empty swing gently swaying back and forth. Åkerfeldt is, as ever, in good humour, his dry response to the crowd’s calls – “What? It’s the accent; it sounds like cats” – brings much as much laughter as the tracks draw applause. And when Enslaved appear to give Opeth gifts in return for taking them on tour, Åkerfeldt asks us to thank once again that famous Norwegian band, A-Ha. With ‘Blackwater Park’ to close the set, what else could top that but ‘Deliverance’ as encore? 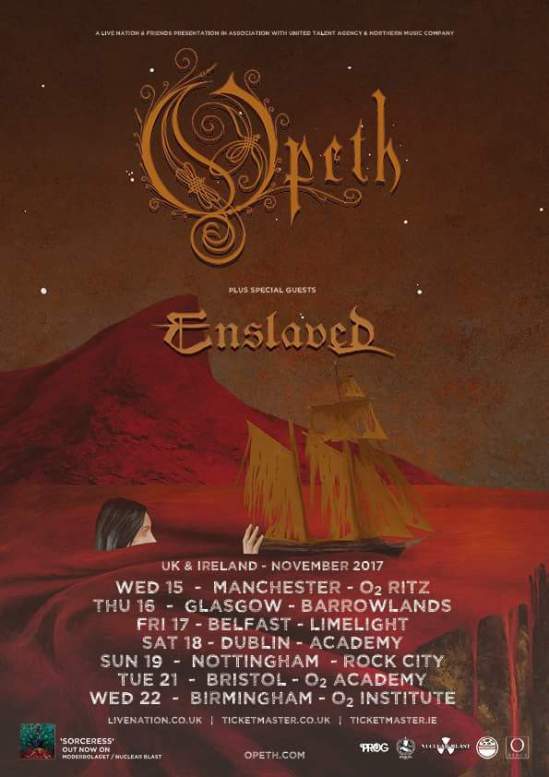