A car crash of an album…

Geoff Tate needs no introduction, but he’ll get one here anyway. As the front-man for Queensrÿche for 30 years (until he was deposed by them citing ‘creative differences’, one difference being in the form of spitting at the drummer) he has an instantly recognisable voice in the classic heavy metal style. Interestingly, despite the acrimonious breakup, Tate was granted the exclusive performance rights to their Operation: Mindcrime album and the sequel Operation: Mindcrime II in entirety as a unique performance. Arguably, that album was the one that pushed Queensrÿche into the mainstream back in 1988, so it’s perhaps another way of sticking up two fingers to his old band (as if billing himself as ‘the voice of Queensrÿche’ isn’t enough, that is). Either way, The Key is the debut album of this new band, and is apparently the first of a trilogy telling the story of an international incident to do with virtual currencies, internet banking, and stock trading.

Yup, you read that right. It’s a rock concept album about international banking, and it’s the first of a trilogy. Forgetting for a moment that it sounds like a really, really dull idea for a concept album, I have to admit that I’m not really picking up on the story all that much in the songs anyway. Some bloke found a key, and there’s some questioning about whether you can change the world or something. Then there’s angst about whether or not you can really change the world, and whether you’ll get in some sort of trouble for it if you try. So you could pretty much just ignore that part entirely and not really miss out on anything. Perhaps parts two and three will make the story clear, but on this showing I’m not really convinced that’s the case.

The important thing is the music, anyway, right? Yeah, of course it is. Unfortunately, that’s pretty incoherent, too. It’s a mangled mess of prog, djent, electronica, and 80s metal that never quite settles into anything coherent. Oh, and there’s a random pseudo-classical instrumental in ‘An Ambush of Sadness’. That, for me, would probably be a better and more honest title for the album. It’s all competent stuff, and the production is more than able to bring the musicality and skill to the fore and let that do the talking. But then instead of talking, it just sort of mumbles, meandering around and not really doing anything much, and throws in the odd saxophone solo. As in, multiple. The high point?

‘Re-inventing the Future’, which is unsurprisingly the one that sounds most like Queensrÿche. I almost like ‘The Stranger’ because it’s got this pseudo-industrial thing going on, but the samples and the random prog intrusions here and there are just too jarring. If you’re a big fan of Tate and prog rock and saxophone solos, by all means give it a go – I’d happily admit that the sophistication and subtletly of the album is most likely totally lost on me. But if you’re just looking for some old-school rock, or you don’t want ‘intellectual’ to be an adjective describing your music, give it a miss. 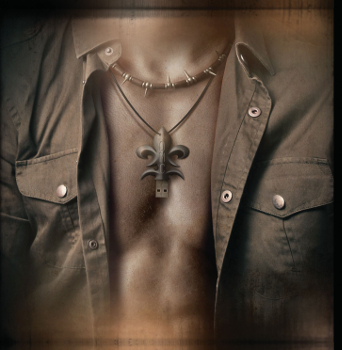