Ole. As in ‘olde’, not the battle cry of a matador. But you can forgive this four piece from Lafayette, Louisiana their possible spelling error because they have gifted us a quite fabulous debut release, chock full of riffs, groove (these words may reappear with some regularity) and attitude.

Ole English describe their sound as ‘Warlock Rock’. So, let’s pick this apart and see what that entails. Well, riffs mostly (see, there’s that word again already), and big guitars, a fair dash of distortion and a wild, woolly, freewheeling blast of rock ‘n roll spirit. Lead track ‘Paladin’ (see above) gets straight down to business – a nicely distorted metallic riff introduces singer Nick Harvey’s raw, greasy, whisky soaked bellow. There is rich interplay in this slab of biker rock, shot through with veins of Soundgarden. Before you know it, it’s time to head out on the highway and it’s gone, in a plume of dust.

And on it goes. ‘Old Man’ references Soundgarden again. But it’s less measured, more abandoned. Guitars twist and turn and push ever onwards like an advancing army. It’s bluesy metal, shifting into an even bluesier groove (there’s that other word). it melds into a very impressive (and heavy) jam. ‘Heel’, meanwhile, is a snarling stray dog of a thing – a full throttle punk barrage, weighted with an almost hardcore aggression.

And then we start to stretch out, open up, head into territories uncharted. ‘Visions Of Ghana’ starts with a bass intro so ambient that you can hear fingers moving slowly over the fretboard. It begins to get Sabbathy – languid, liquid, dripping with menace. It becomes increasingly Sabbathy – ‘black masses’ are mentioned, as is ‘bloody murder’. it drones along crushingly, eventually slowing to an arterial crawl, nodding out to an oozing jam.

Holy Roller jams too, but with more groove and urgency. The bands two-fisted, flare-wearing attack redolent of Chicago Doomsters Trouble (remember them?) – tres 70’s, but with added millennial heaviosity. It, again, drops out into an enveloping bass moment before the guitars ease back, in a spidery, Rob Kreiger style before heading out into the ether for a seriously trippy, sludgy jam (jam, another oft used word here) – everyone going hell for leather…but slowly.

And that’s it, 5 relatively short but very sweet tracks. On the basis of what’s on offer here, Ole English are definitely a name to look out for. This is an album that starts out pretty damn good and just keeps getting better. Recommended and then some. 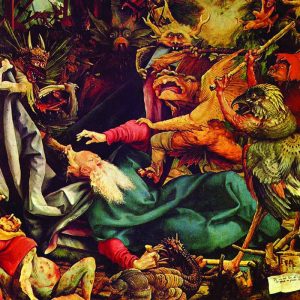