Self released on 25 August 2017 and reviewed by Gary Cordwell

Boom! An opening powerchord and a frenzy of pounding drums. A pause and then straight into the chugging blues funk riffery of opening track ‘Don’t Put It On Me’. Canadian power trio Old James sound hungry. And lean. And loud. Singer/bassist Brian Stephenson gives it the proverbial “my spandex is a tad too tight” wail and lays down some dang fonky basslines, while his brother Chris locks in with some wild, jazz inflected drumming, creating the kind of telepathic groove that only siblings can muster. But then, anyone who plays in a power trio has to doff the cap to that messy rhythm section virtuosity patented by messrs Bruce and Baker.

Oh, and there’s fuzz. That always seems to be a trio thing too and Old James don’t disappoint on that front. Guitarist Andy “T-Cat” Thompson serves up a shit load of distortion amid the nimble, funky and majorly heavy riffage on display on this, their debut album. Solos are short, to the point and lively, Hendrix often waving in the background behind the lightning squall. But riffs and groove are paramount here. It’s full tilt and old school – chock full ‘o nicely rough edges and a contemporary feel.

‘Words As Weapons’ has an almost punk feel to its headlong charge, but with defiantly ROCK guitars. The hairpin bends between ever shifting riffs bringing the joyful stampede of The Wildhearts to mind. But it’s not all bulldozing riffs. ‘So Real’ has a tuneful, Thin lizzy feel. Without sacrificing any of the exhuberant attack they manage to bring a rough hewn melodicism with a natural ease.

The brute force of ‘Salutations’ is a joy, boasting as it does a low-slung Gibson riff that Steve Jones would be proud of, all served up atop a sloppily Neanderthal drum assault. What drummer Stephenson lacks in precision and finesse he more than makes up for in attitude and attack. We then hit a bit of a mid-album slump – ‘Bass-Ik Instinct’ is 90 seconds of 4-string paradiddles while elsewhere we have a cod reggae backbeat bolted onto AC/Top boogie riffery that’s a tad too throwaway.

Faith is quickly restored, however, with the Chilli Peppers on steroids garage funk of ‘Eugene’, with its flamethrower solo and brutal rhythm attack. The title track offers more of the same Motorhead plays Extreme funkery – the band locking in together and roaring ever forward.

Old James are clearly a live band and hopefully they’ll be reaching our shores soon. They should be a force to be reckoned with live, their sloppily tight assault a thing to behold. There’s a lot to recommend here – a great sound and vibe, wild, take-no-prisoners musicianship and a sense of loud, unfussy fun. A spot of judicious editing and a few more strong songs and we could have a serious contender on our hands. 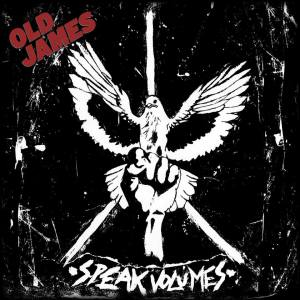