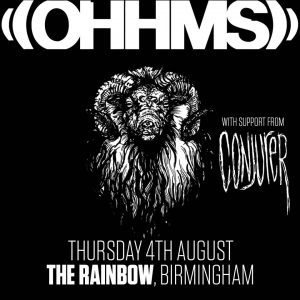 Birmingham promoters Surprise You’re Dead Music have just been shortlisted for a prestigious promoter of the year award. With gigs as fulfilling as this one, it’s not hard to see why. In fact SYD’s
forthcoming conveyor belt of underground gigs is the stuff of dreams for your average extreme metal fan. I was only able to catch the briefest of glimpses of Mothertrucker and openers Long Fall Boots so a review would be pointless but both looked to have plenty going for them.

Conjurer were fixed up to tour with Ohhms long before the invitation to play both Bloodstock and Damnation had landed on their doormat. Now with slots deservedly secured to perform at both festivals, the timing of their return to the Rainbow also constituted something of a warm-up show for Bloodstock, around 10 days in advance of the Midlands quartet’s Catton Park bow. If you’re a regular on the Birmingham underground scene then you would have almost had to be living in a hole in the ground not to have been bewitched by Conjurer’s black box of tricks at some point over the past 18 months. In fact feeling trapped, with the walls closing in around you, is not a bad metaphor as to what it feels like to be hit by the full force of Conjurer’s charred sound.

Their well-received debut release (reviewed here) coupled with successful shows at assorted compass points from north to south mean Conjurer’s confidence levels – which were never really that short at the very start – are now almost visibly flowing from their pores. As ever the juxtaposition of barrel-chested Dan’s beefy growls alongside Brady’s anguished cries bounce off each other like meteors colliding in space, the backdrop atmosphere immersed in black. Alongside these two vocal weapons is drummer Jan who provides a constantly shifting percussive platform across which the grooves are placed, many coming from the always combative guitarist Andy. After a half-hour wave of stifling symphonies Andy took off his guitar and having forewarned us that he was going to try an experiment, took the mic for one song. Well the experiment passed with flying colours so get to the New Blood Stage at 3.45pm on Saturday to see if he repeats it at Bloodstock.

It seems the irony within the name Sealclubber is lost on some and a few overly-sensitive souls in deepest Essex recently only permitted the Black Country quartet to play providing they went on stage under the name of ‘Sealcuddler’. Fortunately such PC mindsets are less to the fore at the Rainbow and so it was the full bludgeoning ‘Sealclubber’ who hopped onto the Rainbow stage three months on from their last show at the same venue alongside Burden of the Noose.

That night was something of an emotional farewell to bassist, and joint band founder, Stephen. And yet here he was back once more, four-string axe in hand, proving harder to shake off than a dose of scabies. Truth is that the band’s efforts to find a satisfactory replacement have so far proved fruitless and having taken on this booking in expectation of having a shiny new bassist in tow they had to send out an SOS to their old compadre. Fortunately he took the call and generously stepped into the breach.

Sealclubber’s debut album Stoical was acclaimed by all the right people in all the right places when released earlier in the year . I gave it 9/10 (reviewed here) and by the end of their suffocating set at the Rainbow I was wondering if I had in fact treated them too harshly. Stoical was pretty much the source for all their songs on the night. Live, the fragmented stop start agonies of opener ‘Tales of a Romanian Horse Whisperer’ were even more visceral with vocalist Simon giving his throat muscles a workout of Olympian proportions that would have had him up on the rostrom in Rio while as a tumultuous aural assault crashed around him, guitarist Joe was not content merely with making his strings bleed but at times almost smacking his instrument in the manner of an exasperated parent punishing an unruly infant. Closing with the absorbing and erratic ‘Vow of Silence’ Sealclubber manage to educe sparks as assuredly as though powered by an old Black Country furnace.

What was already a great evening became even more special when the gently cascading intro of ‘Rise of the Herbivore’ signalled the arrival of Ohhms. They hail from Canterbury and write epic tales of long drawn out doom that even Chaucer would raise a glass too. Like most of their material, ‘Rise of the Herbivore is a colossal number both in magnitude and length. A full five minutes of meandering melancholy captivated the Rainbow crowd before finally frontman Paul Waller partially unlocked the beast to allow the song to take on a more agitated form, perfectly encompassed by the hypnotising shapes carved into the air by his own erratic gestures and manouvres.

Ohhms have made great strides since first gaining wider recognition following their show at Temples in Bristol last year. A debut full length will be out in the New Year although a couple of new pieces were aired in between more familiar songs, closer ‘The Anchor’, one half of last year’s two-track EP Cold. This is a masterful song stretching to almost 20 minutes in which a warm and engaging riff gradually builds into something altogether more strident with Waller almost lost in the melee arms jerking outrageously almost like a puppet with its strings being pulled forcefully by its master. Having watched the Ohhms frontman go through his ritual stageshow it dawned on me that the obvious comparison is with Ian Curtis, the same near transcendental immersion within the music, totally oblivious to anything and everyone else around.

That’s not to say the music itself is ambivalent, far from it, ‘The Anchor’ creeps up on you slowly but then wraps itself around you like an anaconda squeezing tighter with every twist and turn before the soft edges roughen up into a sonic sword fight almost forcing you to duck away from its darting probes. Towards the end of the set closer, Waller is almost hanging over the barrier, eyes clenched shut, crying out as the seismic cacophony swirls around the stage before eventually blowing itself out.