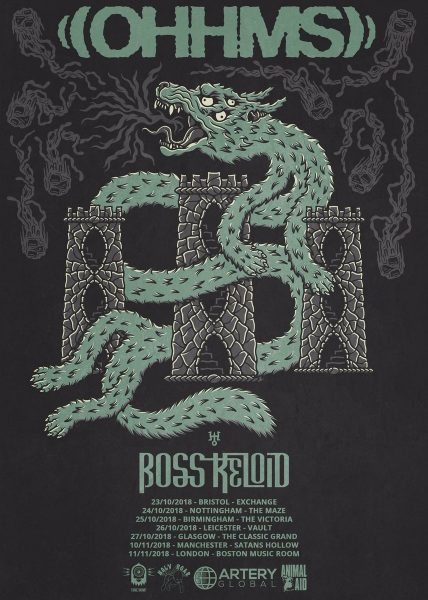 Ohhms pull in an eclectic mix of people. They simultaneously act as an accessible gateway to those new to metal whilst also appealing to those metalheads in search of the deepest and darkest sounds of the genre.

It is Remembrance Sunday and the Boston Music Room is half-full with those dedicated enough to abandon their day of rest for an intimate gathering of doom-infestation. A few words at the Tufnell Park club with Ohhms frontman Paul Waller assures me that the turnout is to be expected – indeed, it is more than expected! Still, a weekday would surely have pulled in a few more souls.

Before we reach the evening’s main attraction, Boss Keloid prove a more than able support. Formed in 2010, the Wigan stoner outfit have an almost indescribable sound, mixing so many different genres it is hard to keep track. In some ways, they are straight-up stoner with long, slowed-down, ring-out chord progressions – creating a droning, hypnotic sound.

And then, quite unexpectedly, guitarist Paul Swarbrick will treat the crowd to some campfire-esque riffs which could easily provide the soundtrack to an ITV drama about Highland farmers (encapsulated by their performance of ‘Jromalih’). This is only intensified by Swarbrick’s appearance; woolly jumper, grand gingerish beard and rectangular specs – Louis Theroux gone rogue.

There were even 1980s techno vibes in the song ‘Peykruve’. Frontman Alex Hirst brings warrior vocals to the table, his prog-rock sound ringing out powerfully. In ‘Chronosiam’ Hirst tunefully sounds out vowels rather than words, again contributing to the campfire vibe. Boss Keloid are beautifully complex although I’m still working out whether their genre-defying music is ingenious or confusing. Either way, it is certainly admirable and commendable.

Towards the end of their set, the Boston Music Room begins to fill out in anticipation of Canterbury’s most celebrated modern day sons, Ohhms. Paul Waller is a frontman like no other. It’s like watching a more mellow Barney Greenway at an animalistic ritual, drugged up on life, the music seeping in through his pores, possessing him like a hungry demon.

His erratic clapping (have you ever seen another metal vocalist clap?) echoes across the room, with his eyes shut tight, he sways barefoot on stage, transported into his own inner world, alone with his thoughts. The frontman is then challenged to a dance off by the no less bewitching bassist Chainy Rabbit whose own vividly distinctive moves somehow resemble an off-duty belly dancer. Bare-chested and with low-slung jeans, he weaves around the stage with erratic circling hip gyrations, a quaint baby bootie dangling from the end of his instrument. He even jumps on top of an amp stack and at one point perilously climbs the drum-kit and hangs from the lights, undeterred and unconcerned by the unsupported equipment quivering beneath his weight.

Ohhms are the masters of the epic doom soundtrack. Everything is a journey. Everything is an experience. Everything is a heart-wrenching narrative of destruction. And when, half an hour from curfew, Waller announces they only have one song left in the locker, we know it can only mean one thing (although several people looked around in concern). It was time for the epic ‘Subjects’ from their new album Exist. It begins slowly, with ring-out distorted chords, evolving into faster riffs which teamed with Waller’s melodic vocals is almost Sabbath in style. This then evolves again into a completely toned down raw sound with clean vocals and delicate guitar work – in parts, it’s almost silent.

The whole album is about animal conservation and animal rights; it’s filled with desperation and anguish. Ohhms are not about the ‘song’ but the ‘story’ and the ‘soundtrack’. Their sound combines genres, as does Boss Keloid, but it is much more of a composition – it does not appear as switching genres but rather one giant genre. Unparalleled in their sound, and with their sophomore album just released via Holy Roar Records, the Boston Music Room faithful are tonight privileged to have witnessed such an intimate and celebratory Ohhms performance.