Nu Metal, remember that genre? Some of you almost definitely won’t, because aside from the odd exception, it’s been pretty much dead for ten years. After their latest album Cold World, though, Of Mice And Men might just have something different to say. It’s possibly their most musically diverse album to date and almost every track on it makes a vigorous nod to that oh so popular genre of the early-2000s. There’s a bit of Slipknot, Linkin Park and Limp Bizkit shining through on several songs respectively. They make it sound huge as well, and seeing them on stage in Nottingham tonight, they make it look just as good.

Opening duties tonight fall to Hands Like Houses who make the trip for the UK/EU tour from the land down under. They’re energetic and frontman Trenton Woodley’s vocals are nearly flawless, but the Nottingham choir tonight, unfortunately, don’t seem willing to reciprocate. It may be understandable for a grass roots band of a different genre, but the Australians share a very similar fan base and are certainly not new to the scene. Their performance of “Colourblind” is scintillating and the whole set is lead with intricate guitars and powerful drumming, closing on the equally brilliant “Introduced Species.”

Crown The Empire are handpicked from a similar musical gene pool and pick up pretty much where Hands Like Houses left off, firing on all cylinders. They open on new track “Are You Coming With Me?” and their energy teems from the stage, particularly singer Andrew Velasquez who moves from left to right without pausing for a break. His voice and charisma are massive for a guy so small in stature and his band’s sound spill from Rock City’s Main Hall, which is now beginning to look pretty full. It’s not quite there yet, but the buzz in the room is certainly picking up and the intensity of the crowd is on its way, ready for the headliner.

They’re here. There’s no easing into tonight’s set with Of Mice & Men as they launch into their new album’s lead single “Pain.” They take the stage to the opening screeching guitars before Austin Carlile unleashes a dirty, guttural roar and gets stuck into what is undeniably the angriest song from Cold World (the aforementioned Slipknot influenced track, too.) They play to a 2,000 capacity venue tonight that looks almost ¾ full; a fan base that they’ve built from the ground up. Seven years into their career (with this band, at least), several line-up changes, four studio albums and a number of personal and health struggles later, they find themselves where they are today with their album hitting #20 in the US Billboard Top 200, shifting almost 20,000 copies in its first week.

Their 16-song set is a blend of all four releases, with plenty from the newest and its predecessor, the four tracks preceding the encore from their second album and their final track from their debut. Aside from the more delicately paced “Away” that’s preceded by a beautiful extended guitar intro, the set is unrelenting. It’s full of vicious breakdowns, rapid guitar and crushing basslines. The “why do some have it all and others they have none” breakdown in new song “The Lie” is brutal and massively received, exemplifying the crowd’s reaction to their new material, which is surprising giving the mixed reception it amassed from long-term fans. The band is extremely well rehearsed, too, not making a step out of line for the entirety of their time on stage, commander in chief Austin in complete control. He may be stern-faced for the most part, but it’s clear that otherwise, he and his band are thoroughly enjoying every moment of their show as beaming smiles creep onto their faces throughout.

Beckoned back to the stage for their encore by the 1,000 waiting fans, they return with “You’re Not Alone” and closer “Second & Sebring.” The latter is the crescendo everybody in the room must have been waiting for, too, as the crowd response and their volume nearly takes the roof off. That final chorus of what is still probably their biggest song is almost deafening, moments before they leave the stage to what was by all accounts an absolutely killer show. 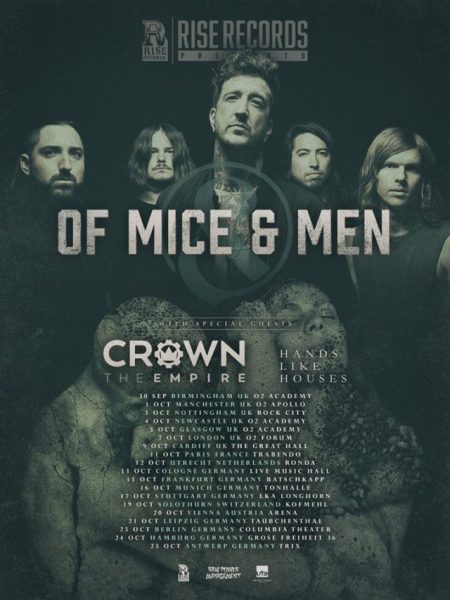